The Scottish government needs to take ‘action on oral cancer’ 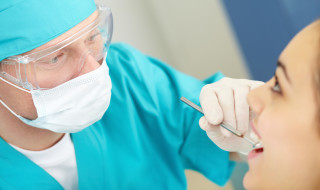 The Scottish government needs to take ‘action on oral cancer’

Dentists are calling on the Scottish government to confront the rise in oral cancer in Scotland.

The British Dental Association Scotland (BDA Scotland) has today launched its five-point plan and has told all parties in Scotland to confront the issue of oral cancer in the country and extend pioneering preventive programmes to include more deprived children.

‘We are facing an oral disease epidemic, and the next government has to decide whether it’s willing to step up and make a stand,’ chair of the BDA’s Scottish council, Adrian Hart, said.

‘Scotland has been topping the league tables on oral cancer.

‘If spotted early survival rates can reach 90%, but delay is costing lives.

‘The next government has to ensure the shortage of oral surgeons is addressed, and that the public are fully aware of the risks.

‘We need a plan on education, prevention and diagnosis.

BDA Scotland is calling for the human papillomavirus (HPV) vaccinations to be extended to include boys in the next government.

Along with this BDA Scotland has launched its five-point plan for better oral health in Scotland:

‘Recent governments have been pioneers in prevention,’ Adrian Hart continued.

‘Childsmile has brought down decay, but it’s not right that a child growing up in a poorer part of Scotland is still over 20% more likely to end up with visible decay than one born in an affluent area.

‘Extending this scheme to cover five-12-year-olds means we can start saving permanent teeth and take more pressure off a cash-strapped service.

‘Every year over 7,000 patients are diagnosed with dementia, and officials can’t let their oral care remain an afterthought.

‘We need to get patients in care homes registered with dentists so they can get the expert care they deserve.’

The success of the Childsmile initiative has led to calls for its coverage to be extended to include five-12-year-olds.

Figures have shown that the number of children in primary one with ‘no obvious decay experience’ has increased from 54% in 2006 to 68% in 2014 – while dental treatment costs in Scotland have fallen by £5 million a year.

However, BDA Scotland believes older Scots have many needs that are often unmet, with it pressing for patients in nursing homes to be registered with a dentist.

The BDA manifesto for the 2016 Scottish Elections is available to download www.bda.org/scotland2016.