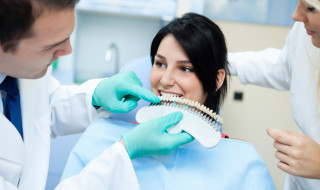 A BBC investigation has revealed the scale of illegal tooth whitening across the west of England.

Undercover reporters found one provider operating under a false name, two years after he had been prosecuted by the General Dental Council (GDC) for illegal tooth whitening.

The BBC’s investigation, filmed for Inside out West, found unlicensed online trainers offering guidance for illegal tooth whitening and recommending products that could potentially cause damage to teeth.

‘The black market in teeth whitening is not confined to the west of England,’ the British Dental Association’s scientific adviser, Professor Damien Walmsley, said.

‘Illegal whitening is now running rampant across the UK, and while authorities are doing what they can it’s vital that the public understand the risks.

‘If carried out by a trained dental professional teeth whitening is perfectly safe.

‘The alternative is illegal for a very good reason.

‘Fly-by-nights with a few hours online training can cause lasting damage to your teeth and gums and can’t help you when something goes wrong.

‘If you put yourself in the hands of unqualified individuals armed with unsafe chemicals then you are gambling with your health.’