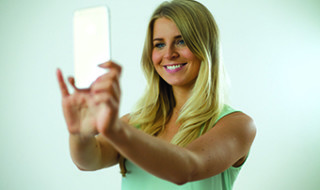 Align Technology, makers of the clear aligner teeth straightening system which has treated over three million patients worldwide, has launched an app which is available for free to download from today. The app – ‘My Invisalign Smile’ – works as a companion to support anyone undergoing Invisalign teeth straightening, and features a number of functions which make keeping track of their orthodontic treatment easier, as well as interesting and fun.

Invisalign aligners are changed in two weekly intervals and the app’s image function includes a built-in guide to allow users to capture consistently positioned camera shots of their face, their smile and their teeth as they transition towards their final, corrected position. These shots build up into a gallery which also allows the person undergoing treatment to compare their changing teeth, side-by-side to see exactly how their new smile is taking shape.

It is also possible to create powerful time-lapse videos which display the user’s teeth transformation story as it unfolds, capturing and demonstrating just how far they have progressed as their dentition moves incrementally over the weeks.

Dental professionals often mention the palpable excitement of the person as their smile is transformed.  Another function of the app captures this sense of growing anticipation by allowing users to share images and videos of their transitioning appearance with friends and family and on social media.

The app also provides those in treatment with regular tailored support, advice and reminders (including prompts to change their aligners every two weeks or attend their next dental appointment) synchronised with their individual treatment plan, so that they stay on the right track throughout their treatment.

Changing the face of tooth straightening

Unlike fixed orthodontic treatments where metal or ceramic brackets are cemented to the surface of the teeth and wires run between them, the Invisalign system works by repositioning teeth discretely, little by little, using a series of custom-made transparent plastic ‘aligners’ which are to teeth what contact lenses are to the eyes – corrective yet imperceptible. Similarly they are tailor-made to each person’s prescription so that they fit perfectly and correct the alignment of the teeth over a period of months. They are changed in two weekly increments to an aligner of a slightly different shape and size, moving the teeth little by little towards their final desired position.

The Invisalign aligners are worn for an optimal period of 22 hours a day, but because they are removable wearers can take them out for short periods, including when they want to eat or drink.  However, most people report that after a few days they forget they are wearing their aligners and they have little impact on their lifestyles, allowing them to indulge in sports, play wind instruments, sing or speak in public – all of which can be difficult for fixed brace wearers. It also makes Invisalign a desirable option for adults, rendering it acceptable to undergo orthodontic treatment imperceptibly and comfortably while they are working.

My Invisalign Smile is free to download from the Apple App Store and is currently available for the i-Phone.  An android version will be available from Google Play in the next few weeks.

3d
|
Orthodontic Practice
Dentistry Online uses cookies to give the best experience. If you continue to use our site, we will assume that you agree to the use of such cookies. Read More.
Accept