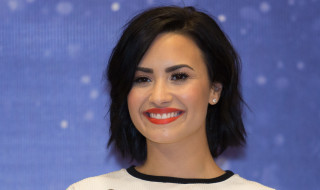 Demi Lovato has revealed that Disney executives persuaded her to correct her diastema.

In an interview with Allure magazine, Demi was asked: ‘What’s the worst beauty advice you’ve ever gotten?’

The 23-year-old explained that she regretted the gap-closing procedure, stating: ‘I signed with Disney Channel when I got Camp Rock, and I had a gap between my two front teeth.

‘They were like, “Would you be willing to fix it?”

‘I wish today that I hadn’t, because my gap was really cute.’

Demi, who found fame as a child actress in The Disney Channel’s TV film, Camp Rock, has suffered from much publicised emotional and body image issues throughout her teen and adult life.

The singer and actress has talked openly about her battles with depression, suffering from an eating disorder, self harm and being bullied.

‘I have insecurities about my arms, so to wear a tank top on stage is extremely liberating for me, and uncomfortable sometimes’, she said.

However, in the interview, she declared: ‘I’ve never felt as confident in my skin as I do today.

‘You’re no longer getting the insecure Demi that you’ve been getting for the past couple of years.

1643d
|
Celebrity News
Dentistry Online uses cookies to give the best experience. If you continue to use our site, we will assume that you agree to the use of such cookies. Read More.
Accept