A sugar tax should be for our oral health, not for our waistlines 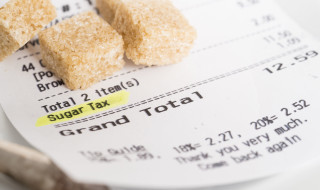 A sugar tax should be for our oral health, not for our waistlines

Seb Evans discusses the confusing reasons why a sugar tax may be introduced, and clarifies the real reason we should be taxing sugary foods.

A sugar tax has made its way into the media again with the FGDP(UK) backing the introduction of it.

With the pressure mounting and more people and companies throwing their weight behind the calls for a sugar tax, I wonder how long it will be before the Government caves and introduces some form of tax for sugary drinks and foods.

Some may say that point has already come after David Cameron hinted at a possible U-turn recently after saying: ‘We shouldn’t be in the business of ruling things out’ when discussing the possibility of a sugar tax.

However, after reading Phil McCafferty’s article in the February issue of Dentistry Scotland magazine, I can’t help but agree with him in thinking the Government is considering a sugar tax for all the wrong reasons.

If this ends up being the reason the Government introduces the tax then it is setting itself up for failure.

Whilst sugar may contribute to obesity, it is not the only or biggest contributor.

Fried chicken, greasy burgers and a lack of exercise all have a larger role to play in the factors contributing to obesity.

And introducing a tax on sugary drinks isn’t going to stop all those people going through the drive through, on their lunches or at the weekends, and ordering an extra large burger meal.

A tax on sugar should be introduced, but only if it’s aim is to reduce the burden of children’s teeth extractions on the NHS.

Sugar feeds the bacteria that helps to form caries and this is the main reason we should be reducing people’s sugar intake.

The money raised from the sugar tax should then be reinvested in preventive strategies to help improve the nation’s oral health.

Any other reason for a sugar tax does not make sense and will not have the desired outcome, thereby meaning the sugar tax will be seen as a failure.

Conveniently timed, FMC is launching a new magazine this month called Oral Health, which will cover all oral health topics and is for dentists and the dental team alike.

Oral Health magazine will be launching with the campaign People of Prevention, or #POP, to recognise those people making great efforts to increase prevention in dentistry.

So get behind the #POP campaign, raise awareness of the detrimental effect sugar can have on our teeth, and not necessarily on our waistlines.