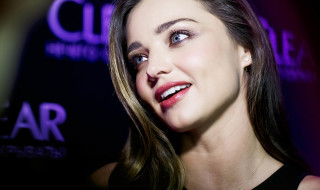 Miranda Kerr has revealed that she practices oil pulling to keep her oral health in check.

The actress, who is also a certified health coach, told lifestyle website Refinery29: ‘I just started this new thing where I do oil-pulling with coconut oil, so I put a tablespoon of coconut oil in my mouth, right?

‘Swish it around for a good 20 minutes – you’re not allowed to swallow.’

Oil pulling is an Ayurvedic medicine practice where oil – coconut and sesame oils are among the most popular to use – is held and swished in the mouth for around 15 to 20 minutes.

Users of the practice claim that oil pulling can improve oral and systemic health by ‘pulling out’ toxins from the mouth and into the oil, thereby reducing inflammation.

The cited benefits for oral health include that oil pulling can strengthen gums, whiten teeth and eliminate plaque.

Oil pulling has also been used as an alternative treatment for temporomandibular joint disorder.

The practice has become a health trend among celebrities over the last few years, with advocates including Gwyneth Paltrow and Katie Price.

Opinions are mixed as to whether oil pulling has any significant benefit to health.

One 2014 study states that ‘Oil pulling with sesame oil is equally efficacious as chlorhexidine in reducing oral malodor and microbes causing it’ and that the practice ‘should be promoted as a preventive home care therapy’.

However, a study published in 2015 found that ‘Oil pulling did not provide any additional benefit to be used as an effective antimicrobial agent in reducing the bacterial colonization of an individual’.

Charlotte Wake, dental hygienist and therapist, and winner of the Dental Therapist of the Year award in 2011, warns the public to be wary of new health trends.

Charlotte told Dentistry.co.uk: ‘Further research is needed in the area of oil pulling. It is important patients do not use this therapy by way of replacement for their regular dental visits.

‘In May 2014 the American Dental Association said on its website: “Oil pulling therapy has insufficient peer-reviewed scientific studies to support its use for oral conditions”.

‘I still only recommend evidence based products.’