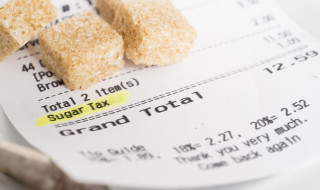 The Welsh Government has become the first parliament to back moves for a 20% sugar tax on sugary drinks.

‘Finally we’re seeing some real leadership on the sugar crisis from our elected representatives,’ Mick Armstrong, chair of the British Dental Association, said.

‘Britain is addicted to sugar, and if we’re going to break that habit it will require politicians in Westminster, Edinburgh and Belfast to pick up the trail set by pioneers in Cardiff Bay.

‘Sugar has placed a huge and avoidable burden on our NHS.

‘It’s nothing short of a national scandal that we’re seeing children lining up in our hospitals for tooth extractions, and we need parents, business and policymakers to take action.

‘This vote demonstrated the Welsh Government is prepared do its bit, even if it means going where other governments fear to tread.

‘A sugar tax is not a silver bullet, but together with action on public education, reformulation, and marketing we can start changing habits and improving health.

‘Ministers across the UK will be failing in their duty to the public if they take any of these measures off the table.’