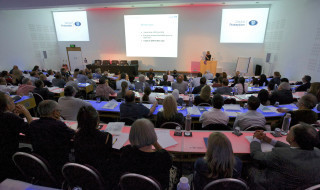 Dental Protection ran a show around the UK advising the dental team how to reduce the risk of a claim being brought against them and to provide information about the GDC. Seb Evans went along to find out more.

With almost 5,000 complaints to the General Dental Council (GDC) and the Dental Complaints Service in the past year, dentists are understandably anxious about receiving a complaint from their patients. In addition, a Dental Protection survey of over 700 dental members earlier this year revealed that 72% of respondents are fearful of being sued by patients, with this fear impacting on the way 81% practise dentistry.

For this reason Dental Protection announced its Horizons Roadshow throughout September. Hosted by senior dento-legal advisers at Dental Protection, Sue Boynton and Stephen Henderson, the show explained how to reduce the risk of a claim, and what to do if a claim against you does happen.

‘Dentists are currently working in the most hostile claims and regulatory environment we have seen, and as a result, the chance of receiving a GDC complaint has never been greater,’ Kevin Lewis, dental director at Dental Protection, said.

‘In fact, the GDC has reported that the number of complaints reaching them has doubled in the past four years. More and more of these complaints are unrelated to clinical dentistry, so even the best dentists can still find themselves challenged by the GDC.

‘Dental Protection has vast experience dealing with claims and the GDC. Our Horizons Roadshow provides an opportunity to find out about the pitfalls that can lead to claims and regulatory investigations and how to avoid becoming one of the unwelcome statistics.’

Sue Boynton then took to the stage to discuss claims in negligence and importantly what you can do to minimise the risk of having a claim. In a simple and professional manner, Sue explained why some cases are settled, whilst others are defended all the way. She pointed out that for a case to be successful, the patient has to prove:

This, Sue explained, is why good records are important by way of evidence.

Sue finished by explaining that there was no need to worry about receiving a complaint, which is why Dental Protection is there. She pointed out that Dental Protection has a huge team of specialist advisers on the end of the phone to speak to if you are worried about any issues and for advice.

What’s happening at the GDC?

After a delicious meal, Stephen Henderson came back to the stage to answer the question that was on the lips of a number of the attendees: what’s happening at the GDC? Stephen opened by quoting a Dental Protection survey stating that 34% of dentists consider leaving dentistry after a GDC investigation and 78% felt a GDC investigation had an adverse affect on their health and wellbeing.

Stephen pointed to the rise in fitness to practise investigations over the last 15 years and explained why this has happened. He showed that there has been a significant rise in the past five or six years, which might be explained by a difference of opinion between the GDC and Dental Protection about how the Dentists Act should be interpreted, in terms of what the GDC must investigate and what it must turn away. Stephen also hinted that maybe we had reached the peak number of GDC investigations in 2014, and despite reaching close to that, he doesn’t believe the 2014 number will be beaten in 2015.

If there was one piece of advice Stephen wanted delegates to come away with after his session, he said: ‘Please write it down!’ He explained that it was such a shame when dentists came to him, adamant they had done everything right, but looking through their clinical notes there is no evidence of the discussions that took place, and that leaves the dentist in a
vulnerable position.

Although the chances of erasure by the GDC are very slim, the distressing impact of an investigation can be devastating to a practitioner. Events like these are really important to ensure the whole dental team remains compliant but also to put practitioners minds at rest.