Dentists in the Belfry 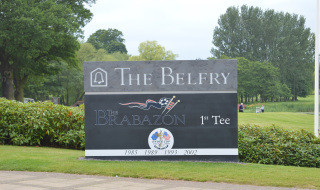 Dentists in the Belfry

This summer Denplan hosted five golf days at great courses throughout the UK.

The June events were heavily subsidised by Denplan, which offered tiered discounts based on the number of Denplan patients registered at the practice. For example, for a practice with over 500 Denplan patients, the fee for the day was discounted by 50%.

The event was open to all members of a practice and dental professionals could book more than one event. Partners were even encouraged to attend the dinner for just £55.

When the invitation landed, I was excited to be able to play at the Belfry (the European home of the Ryder Cup), but I did not expect to be playing the Brabazon for a fee as low as £60. I didn’t expect the nine-hole warm-up round included in the price either.

The day started with tea, coffee and bacon rolls before nine holes on the Derby course.

A quick lunch preceded the afternoon round of 18 holes, where pairs of dental professionals competed in a three-quarter handicap Stableford better ball competition.

In addition, attenders also had the opportunity to claim other prizes for events such as the longest drive, nearest the pin and beat the pro. I beat the pro – he is cleaning my clubs right now!

Not every one of the June events were at the Belfry. Other venues included:

After the day of golf, we joined Denplan in the clubhouse to toast the day, before enjoying pre-dinner drinks and a three-course celebratory meal.

You can enhance your golf day by booking a room with Denplan’s special rates and for the very first time you will be able to bring your partner along for dinner.

The deal represents fantastic value for money. It is well organised and gives the opportunity for dentists, who normally operate in isolation, the chance to network and play golf in a friendly and like-minded atmosphere.

In the main competition, third place of champagne and trophies went to the duo of Lolo Jones and Osian Davies, with 37 better ball points.

In second place on the same number of points, but with a better back nine, were Ritesh Aggarwal and John Peach.

The winners were Mark Webb and Mark Sykes with 39 points.

Nearest the pin was Stephen Keane and longest drive winner was John Peach.