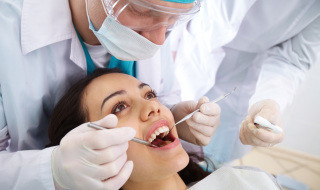 The number of patients registered with NHS dentists in Scotland has risen sharply – amid growing criticism of problems in England.

The Scottish Government hailed big improvements, even in poorer areas such as Glasgow, working under the payment system that was abandoned south of the border.

Bob Doris, an SNP MSP and deputy convener of the Scottish Parliament’s health and sport committee, described the latest figures as ‘great news’.

And he said: ‘I am particularly encouraged that 93% of children in Scotland are registered and that this rate remains high across all sections of society and all across the country.

‘That includes in Glasgow, which has national high in the number of children and adults registered.

‘The SNP is totally committed to tackling health inequalities in Scotland so it is encouraging to see that the record number of dentists in Scotland is being matched by a record level of uptake by patients.’

The SNP has attributed its success to a substantial increase in spending on dentistry, including on improved surgeries and significant incentives for dentists to join NHS lists.

Hundreds of dental students are given bursaries that require them to work in the NHS for a number of years following graduation.

And dentists are paid a fee for each episode of treatment carried out – in sharp contrast to England, where dentists agree ‘units of dental activity’ in return for their contract.

No date has been set for the introduction of the long-awaited new contract in England, more than three years after the first trials got underway.

And the proportions of both adults and children seen by an NHS dentist are virtually unchanged since 2006.

Queues around the block

The situation in England prompted stinging criticism, last month, from the British Dental Health Foundation, which warned of ‘queues around the block’ for an NHS dentist, unless extra money is pumped in urgently.

The dental charity painted a bleak picture unless ministers pressed the accelerator on the new contract and lifted the cap on the number of treatments dentists can perform each year.

Meanwhile, Dentistry reported that Conservative peer Lord Colwyn had accused his own Government of ignoring NHS dentistry in its post-election plans.