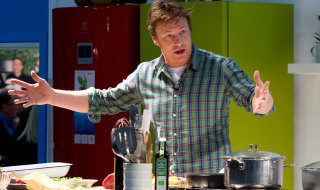 Jamie Oliver has announced that his restaurants will charge an extra 10p for all drinks served containing added sugar.

His announcement comes after the British Association of Dental Therapists (BADT) said that it supports the anti-sugar campaign from Action on Sugar.

‘I was born into the restaurant industry and I truly believe that by joining together on this issue we not only send a powerful and strong message to the Government, but we also have the potential to make a long lasting legacy that could ripple across the world,’ Jamie Oliver told the Sunday Times.

‘I’ve seen first-hand the heartbreaking effects that poor diet and too much sugar is having on our children’s health and futures.

‘Young children are needing multiple teeth pulled out under general anaesthetic and one in three kids now leave primary school overweight or obese.

‘Soft drinks are the biggest single source of sugar among school-age kids and teenagers and so we have to start here.’

Action on Sugar has made an unprecedented call to tackle and reverse the obesity and diabetes epidemic.

Earlier this year, figures from the latest Children’s Dental Health Survey revealed huge inequalities in the dental health of children.

At the time of the release, Public Health England’s director of dental public health, Dr Sandra White, said the survey highlighted ‘the need to urgently reduce the amount of sugary snacks and drinks in our children’s diets’.

The British Dental Association (BDA) has claimed Brits eat around 700g of sugar a week: that’s an average of 140 teaspoons per person.