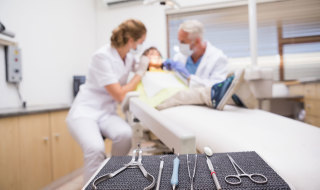 A Conservative peer has accused his own Government of ignoring dentistry in its election plans, despite ‘worrying’ rates of decay in children.

Lord Colwyn – a former dentist himself – revealed he had been asked to join meetings with the Tory health team, as the party’s manifesto was drawn up earlier this year.

Yet, when that manifesto was published, dentistry was ‘conspicuously absent’ – as it was from the policy promises put forward by Labour, he said.

Speaking in the House of Lords, Lord Colwyn also warned a failure to cut stark differences in tooth decay in children from rich and poor homes would undermine David Cameron’s ‘one nation’ rhetoric.

And he called for dentistry to be part of the Chancellor’s ‘northern powerhouse’ ambition, by including it within plans to integrate health and social care services

The peer also criticised slow progress on a new dental contract, saying: ‘Beyond a few pilot schemes, the dental profession is still waiting for any conclusions.’

Intervening in the Queen’s Speech debate, Lord Colwyn asked: ‘The parties tried to outbid each other on spending, but where does dentistry sit in that health debate?

‘I was flattered to be included in meetings with my noble friend Lord Howe and with the Secretary of State to consider likely health issues for the manifesto.

‘But it was telling that, of all the major parties, only the Greens and Plaid Cymru mentioned dentistry in their manifestos.’

That omission came despite ‘worrying figures’, Lord Colwyn said – pointing to nearly a third of five-year-olds, and nearly half of eight-year-olds, with ‘obvious decay in their primary teeth’.

He added: ‘Under a Government led by a one-nation vision, we must feel deep concern about oral health inequality that sees a fifth of five-year-olds eligible for school meals with severe or extensive tooth decay, compared with 11% of those from more privileged backgrounds.

‘More than a third of 12-year-olds, and more than a quarter of 15-year-olds, reported being embarrassed to smile or laugh due to the condition of their teeth.’

Lord Colwyn also urged ministers to give priority to a ‘rethink as to how the profession is regulated’.

He said: ‘The dental profession has expressed grave concerns with its regulator, but also a willingness to move to a better model for all.

‘It is therefore disappointing that the gracious speech made no reference to the Law Commission’s recommendations for health regulation.’

And, on the ‘northern powerhouse’ – which will include the devolution of health budgets, first to Manchester – he said dentistry must be included.

Lord Colwyn added: ‘More than 25,000 children were admitted to hospital in 2013-14 because of tooth decay, the single largest reason for admission.

‘It is clear that dentistry cannot be considered in isolation – the interplay between oral health and general health, dentistry budgets and other NHS budgets, must feature in any discussion.’