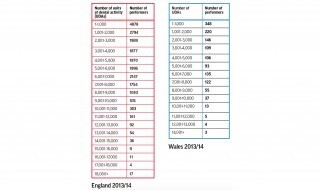 Over the past few years many within the profession have come to realise that some dentists have done extremely well out of the 2006 contract, whereas others have struggled.

The concerns raised by numerous dentists about the contract have been tempered by others who are seemingly able to churn through UDA after UDA (units of dental activity) with considerable ease.

Figures revealed by the NHS Business Services Authority (NHSBSA) under a freedom of information request for Dentistry magazine indicates the significant differences between UDA claims made by dentists within England and Wales, with a staggering 1,323 dentists in England and Wales claiming over 9,000 UDAs in 2013/14 and, on the more extreme end of the scale, 17 dentists in England claiming over 18,000 units of dental activity the same year.

It is of course possible for there to be wholly legitimate reasons why this has happened.

For instance, if hygienists or therapists under a single performer were making claims then this will skew the results.

In a recent NHS dental scandal surrounding failing cross infection control measures, Dr D’Mello was suspended after he was filmed by a whistleblower seeing up to 40 patients in one morning, whilst failing to change his gloves and properly sterilise equipment between appointments.

An NHS contract report showed Mr D’Mello’s two-person practice in Daybrook was contracted to do 29,000 UDAs in 2014-15.

Whilst the story fed a media frenzy for a few days, little was made about how Dr D’Mello was awarded such an excessive contract or how on earth he was ever going to meet such a high target – at least in any ethical sense.

A report entitled Dental Contractor Loss Analysis Exercise by the NHSBSA looked at a random sample of 5,000 claims and concluded that the estimated loss to suspected contractor fraud during 2009/10 was £73.188m based upon an assessment of resolved treatment queries, with a potential for a further £5.31m of loss in unresolved queries.

Surprisingly the report could only verify that 75% of all claims were deemed to be appropriate.

By now I’m sure that most of you as readers have come to some sort of conclusion.

If anyone can think of what they think the maximum number of UDAs dentists should be allocated is, please feel free to email me directly at [email protected] as I would be interested to know your thoughts.