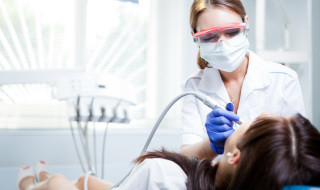 David Cameron has warned that Parliament will lose vital knowledge of dentistry if MPs are banned from having second jobs.

The prime minister picked out the profession as a way in which Parliament is made ‘stronger’, as he rejected Labour calls to crack down on lucrative outside earnings.

The Labour leader announced that, from May, his MPs will not be allowed to hold directorships or be consultants – and mooted a 10% cap on outside earnings.

But, in reply, Mr Cameron said: ‘Parliament is stronger because we have people with different experience.

‘When we look around this Parliament, we see we have actually got practising doctors, practising dentists, people who served our country in Afghanistan or Iraq, and people who run family businesses or have other interests.

‘What we want is a Parliament where people can come and share their experience and make some points.’

Mr Cameron also rejected claims that MPs with outside jobs neglect their constituencies, pointing out that he combines being prime minister with being MP for Witney, in Oxfordshire.

However, Angela Eagle, Labour’s shadow leader of the Commons, later suggested professionals such as dentists could ‘keep in touch’ without topping up their earnings.

She said: ‘It is possible for someone with those connections to keep in touch to carry on doing jobs, but not in a remunerated way.’

The current Commons register of interests suggests only one MP – Conservative Sir Paul Beresford – is a dentist, working part-time at his practice in south-west London.

Sir Paul declares that he works approximately 400 hours a year, but ‘made no drawings from the company’ in either of the last two financial years.

Another Conservative hereditary – Lord Colwyn – worked as a dentist from 1965 until 2007, but is now retired.

In his reply, the prime minister said the ‘most important thing is to make sure we apply the rules’ – pointing to a ban on paid lobbying and a compulsory declaration of interests.