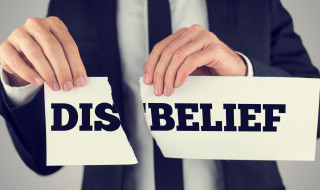 Kevin Lewis discusses the current perceptions of dentists and explains where all this has come from.

It is said that people only believe what they want to believe. Indeed, I am reliably informed that it was said by Julius Caesar, and if you will believe that you will believe anything. The phrase has also been associated with and attributed to (amongst others), the Tudor/Elizabethan philosopher and one time Lord Chancellor of England, Francis Bacon.

Is there really any substance in the underlying notion of the phrase?

Apparently so. About four years ago an article was published in the journal Psychological Science. This reported the results of a study by Bastardi et al (I know what you are thinking, but this really is true). The research investigated how people evaluated new evidence when what they believed to be true conflicted with what they wanted to be true.

The study showed people are biased to interpret evidence in ways that are consistent with their preconceived beliefs. Irrespective of the evidence, they will tend to believe that the weight of this evidence supports whatever it is that they wanted to be true in the first place.

Intelligent people go further than this and have a tendency to rubbish studies that produce findings and conclusions contrary to what they would have liked to see. And they display a willingness to disregard the failings of other studies, as long as it comes up with conclusions that they would support. The work of Bastardi et al also demonstrated that when people manage to persuade themselves that the evidence supports their preferred position (even when the reverse is true), they develop a blind spot to reject any suggestion that their preconceptions might have influenced their evaluation of the evidence.

Taking one for the team

Many years ago I was my local dental council (LDC) secretary, and I was voted in to do a bit of public relations on the local community health council by giving a presentation on the realities of general dental practice and how it differed from general medical practice.

As I walked across the car park and approached the building, I was greeted by a somewhat bohemian apparition sweeping towards me with flowing garments that boy scouts could have camped in, and wooden earings that were a bit too large to be eco-friendly. Her name was Audrey and in a voice that was at the unexpected end of the Beaufort Scale she said: ‘You must be Kevin Lewis.’

‘Flash car, flash suit, flash smile. Could only be a dentist.’

This was not the start of a wonderful relationship. In fact it was the start of a torrid evening that felt like a custodial sentence. My brief was to explain the challenges of running an NHS dental practice, to a room full of people who had the same sort of preconceptions about dentists as one hears these days about Premier League footballers.

I for one am getting a little weary of people being a little too prepared to think the worst of general dental practitioners. Almost 30 years ago the Department of Health (DH) commissioned some research into the barriers to dental care/treatment, and I ended up giving presentations around the UK with the head researcher. The research threw up some familiar perceptions about dentistry being painful, etc, and costs being too high etc. There was a fascinating difference between perceptions of ‘dentists’ and ‘my dentist’. For the most part ‘my dentist’ was wonderful and blameless, while people often subscribed to the popular myths about other dentists that they knew nothing about.

But for some reason it hurts when these myths are peddled. And it hurts even when it isn’t you being described. It is an unwarranted collective assault, and every dentist bleeds vicariously because every member of the dental profession has a stake in its reputation and standing.

This was why the profession was up in arms over the ‘Pendlebury’ memorial address given at the FGDP last June by the General Dental Council (GDC) chair, Bill Moyes.

A year or so earlier, The Office of Fair Trading (OFT) had similarly rubbished some perfectly credible research (of its own, interestingly enough), which showed high levels of patient satisfaction with their dentist. This report was more extraordinary in that the premise given by OFT for questioning the evidence was that these patients had no basis upon which to be happy with their dentist – ie there was no ‘evidence’ to justify such satisfaction and the OFT’s assertion was in short, the patients’ satisfaction was misplaced and unwarranted.

And now this month the consumers association has let the dogs out in corresponding fashion with this month’s issue of Which? magazine. The article on dental costs makes a passing mention of its own inconvenient finding that a very high proportion of patients do seem to trust their dentist, this awkward fact being buried in several pages of wall-to-wall reasons why patients should not be trusting their dentist at all.

Believing only what you want to believe is taken to a new height when you’re talking about discrediting your own evidence, and when there is no personal or commercial benefit.

What is it that makes so many people and organisations believe that the only smart people in the world are those that share their own views?