An award-winning evening at the Dentistry Scotland Awards 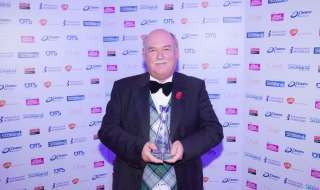 An award-winning evening at the Dentistry Scotland Awards

Graham McKirdy scooped the prestigious Outstanding Contribution to Scottish Dentistry award at 2014’s Dentistry Scotland Awards. We catch up with Graham to find out what it means to him.

Dentistry magazine (DM): How does it feel to have won the Outstanding Contribution to Scottish Dentistry award?

Graham McKirdy (GM): I have to say I was surprised but delighted to have won the award.

DM: Did you enjoy the evening?

GM: Yes I did. I actually think the evening showed all that’s positive in Scottish dentistry. Despite all the problems that surround dental practices, the practices that were at the Dentistry Scotland Awards I think they showed such enthusiasm it was really gratifying.

DM: What do the Dentistry Scotland Awards mean to you?

GM: The carrot rather than the stick approach is the best way forward for patient care. I think it’s better that people are rewarded rather than pushed into doing things.

DM: What do you think the Dentistry Scotland Awards are doing to the standards of dentistry in Scotland?

GM: They’re showing dentistry in a positive way, they’re showing dental practices that deliver dentistry in that way, and I think it improves the patient experience. It’s actually good because patients are increasingly attending to have a good oral health experience, rather than to treat pain. Dare I say maybe even for enjoyment rather than fear. The practices that were there show that in a very positive way.

DM: Is the practice of dental care changing now?

GM: Yes. It’s becoming a lot more preventive and cosmetic delivery. There is still always going to be the need for what could be the delivery of care and repair of teeth, but certainly prevention is changing, especially with youngsters in Scotland.

DM: Why do you think you won?

GM: Most of the work I do is behind the scenes. I think it’s probably the dentists that have worked with me, they have obviously felt that this should be recognised.

I tend to go and get things done as best as I can. It’s a bit like a football team, you’re part of a team, occasionally you’re a captain but you’re a part of a team and everybody works to deliver what’s best for dentists and patients.

DM: Where did you learn dentistry?

DM: What or who has inspired you in your career?

GM: I would actually say that many people have influenced me, but I would like to pick out two people.

One was a dentist, Jimmy Smith, who I first worked with when I qualified. He mentored me very well.

Then when I got involved in national dental politics, a dentist called Bernard Caplan, was a great role model.

Sadly these two fine dental professionals have passed away now, but those were the two I would pick out.

DM: What advice would you pass on to any new aspiring dentist?

GM: Basically, go with your instincts and grab the chance if it comes along, because it might never come a second time.

DM: How do you see the dental profession evolving in the future?

GM: I think sadly for the worst. Dentists are now really being micromanaged by a combination of the Government, General Dental Council, payment authorities, which I believe is undermining the patient/dentist relationship. It’s really suffocating dentists, their practices and their staff with bureaucracy.

DM: Would you recommend the awards to other dentists?

GM: Yes I definitely would.

DM: Have you got any particular highlights from the evening?

GM: I think the overall enthusiasm from the evening, it really came through. I’m quite impressed by it all, not just the winners, but actually everybody round about, it was a really really positive event. I’ve come away with positive feelings.

DM: Will you be coming to the awards again next year?

GM: Thank you again, from myself and probably my wife, she’s the one that’s put up with things over the years. It was a genuine shock. Once you started to announce the winner I stopped listening at that point, I was just thinking: ‘Right, let’s put together what I’m going to say so I don’t make an idiot of myself here.’ I genuinely appreciate it, it means a lot to me to be recognised.