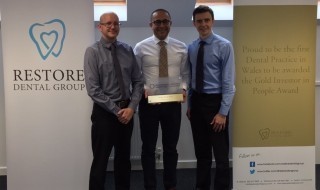 Restore Dental Group is the first practice in Wales to have achieved the Gold Investors in People award.

Two of the practices are based in Cardiff, while the third is in Ponthir, just north of Newport, and all of them are predominantly NHS.

The previous owner had attained Investors in People awards in the past, so the new owners were keen to go for it again.

The business coach, Chris Barrow, suggested that we try to attain the highest level, as it would be great for the team and for the patients.

Clearly it would also be very interesting for the owners to see how their new business was running on all levels.

Investors in People has been around for more than 20 years and is a standard that is based on the principle that happy and healthy workforces are the most effective, and that seeking feedback on how organisations are doing helps them to make continuous improvement.

The process for the Investors in People award was very helpful, and Raid, Shaun and Richard quickly found areas of day to day working life that could be improved, but were also able to see many of the things they were already doing, like constant communication and regular group meetings, were already helping the practice move in the right direction.

All staff members gave their feedback saying that the experience had been positive and felt that their ideas and contributions had been listened to and acted upon where necessary.

Raid, Shaun and Richard are very proud that after 16 months of running the business they managed to achieve the Investors in People Gold award.