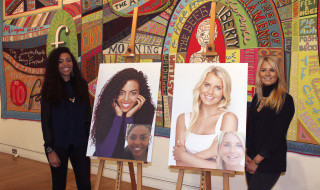 Invisalign has unveiled Kirsty Roberts-Millman and Mikala French as the new faces of its consumer branding, after a competition to find faces and lives which had been transformed by Invislign treatment.

After a five-year search Kirsty Roberts-Millman (pictured left) found her father, only to lose him tragically in a car crash. With money he left her, she had her teeth straightened. Mikala French (on the right) couldn’t enjoy romantic meals with her new boyfriend because she was sure he would think her teeth looked awful when she spoke. Both young women’s lives have been transformed by having their teeth straightened and are celebrating a further transformation after being announced as new faces of the Invisalign brand.

Earlier this year Align Technology announced the search for inspirational people whose lives had been transformed after their teeth were straightened with Invisalign. Kirsty and Mikala were chosen by a panel of independent judges which included specialist orthodontist Dr Peter Ilori and Daily Mirror journalist Sara Wallis.  As part of their prize they were flown to Paris for a professional makeover – hair, make up and clothes styling­ followed by a photographic session with Laurent Darmon – the celebrity photographer who is famed for his shots for Victoria’s Secrets –  to launch them as a new ‘Face of Invisalign’ during December 2014.

In her entry 27-year-old Kirsty Roberts-Millman described the impetus to get her teeth straightened and how it help her smile again after her father’s untimely death. With the money Kirsty inherited she invested in Invisalign treatment, and gained more than just straight teeth. She had never been confident about her looks or smile and explained that she had a wide and somewhat cheesy smile with a mouthful of crooked teeth. Kirsty commented, ‘Spending money on Invisalign is by far the best money I’ve invested in myself, and with every week my confidence grew and it gave me the type of confidence that nobody can take away; the type that makes you want to smile.’

In her winning entry, 28-year-old Mikala French explained that Invisalign treatment has changed her life and given her the confidence to smile. She commented, ’Before my treatment I was nervous about my smile and hated many photographs of myself because I felt my teeth looked terrible! I didn’t enjoy romantic meals with my new boyfriend because I was sure he would think my teeth looked awful when I spoke and I became constantly worried about the way my teeth looked. After nine months with Invisalign I feel transformed! With the support of my dentist the treatment was simple, nobody knew I had the aligners because they were clear, it did not affect my life and there was minimal discomfort. Having nice straight teeth is priceless for me, I am no longer nervous, my smile is confident and I would recommend Invisalign to everyone!’