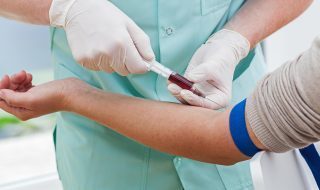 Around 22,000 patients are being recalled to take tests for blood borne viruses after dentist, Desmond D’Mello, was alleged to have breached infection control procedures.

Nottinghamshire Police is now also investigating after a woman died the same month after she was treated by Mr D’Mello.

NHS England has said: ‘Our investigation demonstrates that acceptable infection control standards do not appear to have been followed by Mr Desmond D’Mello, whilst he was treating patients at the former Daybrook Dental Practice.

‘Immediate actions were taken to protect current patients once these apparent lapses were identified.

‘However, this alleged drop in clinical standards may have put people at a low risk of blood born viruses (hepatitis B, hepatitis C and HIV).

‘Therefore, as a precautionary measure, we are advising all patients who have seen Mr D’Mello to seek further advice on what action they may need to take.’

NHS England said it appeared Mr D’Mello ‘failed to wash his hands and used the same instruments for more than one patient without sterilising them between appointments.’

Desmond D’Mello has been suspended by the General Dental Council.

Doug Black, from NHS England, said: ‘We are extremely sorry for the undoubted worry and concern that people may feel on hearing this news.

‘I would like to stress again that the risk is low but would encourage anyone affected to contact the advice line.’

Chair of the BDA’s General Dental Practice Committee, Dr John Milne, has said: ‘There is absolutely no excuse for putting patients at risk.

‘We champion the highest standards in dentistry, and rigorous infection control procedures need to be at the heart of any practice, large or small.

‘Clinical experts from Public Health England have established there is low risk of exposure.

‘But today these patients need some reassurance, and recall is therefore a sensible precaution.

‘Dentists across the UK are setting high standards, and any exceptions are both regrettable and rare.

‘But today’s news does raise questions about the current inspection regime.

‘We’ve long argued that dental experts need to be on the front line for inspections.

‘We must ensure we have inspectors who know what good practice looks like, and we will be working closely with the Care Quality Commission to make that a reality.’

Nottinghamshire Police was asked by a coroner to investigate Miss Duffield’s death, a patient of Mr D’Mello, and that of a second woman, aged 29, who died the same month.

The BBC has reported that Miss Duffield, a Leeds University graduate, died in hospital in August 2013 of viral acute myocarditis after suffering palpitations, her family said.

‘She was unique – my best friend as well as my daughter.

‘Of course I miss her terribly, having lost her at such a young age with so much of her life in front of her.

‘I have nothing but admiration for the superb care given to Amy by the NHS in the last days of her life.

‘They did their very best to save her, but it wasn’t to be.

‘We will of course be interested in the findings of the investigation, whatever the outcome, but it won’t bring Amy back.’

Links between the second, 29-year-old woman have been ruled out by detectives.