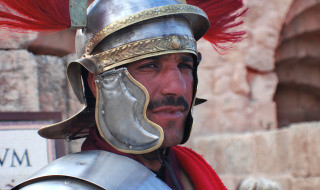 People living in Roman Britain had healthier gums than people today a new study has shown.

A team at King’s College London and the Natural History Museum, found only 5% of adults had gum disease in the Roman era, pre-toothbrush.

Gum disease has risen to nearly one in three people today with smoking and type 2 diabetes being blamed.

However, the study, published in the British Dental Journal, also showed that mouths were full of infections, abscesses and tooth decay.

Professor Francis Hughes, from the dental institute at King’s College London, told the BBC: ‘The amount of severe gum disease around today is around one third of the population.

The research group looked at 303 skulls from a burial ground in Poundbury, in Dorset.

Professor Hughes said these findings were evidence that gum disease is about far more than brushing twice a day.

Theya Molleson, from the Natural History Museum, said: ‘This study shows a major deterioration in oral health between Roman times and modern England.

‘By underlining the probable role of smoking, especially in determining the susceptibility to progressive periodontitis in modern populations, there is a real sign that the disease can be avoided.’

Professor Hughes finished by saying: ‘We are in a better state overall now because what was clear from the skulls is they had longstanding infections that must have been a source of chronic pain over many years.’