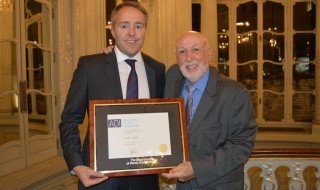 The ADI committee were unanimous in their support of the suggestion of honorary membership being conferred on Carl E Misch.

Philip Friel, ADI president, said: ‘Given the extraordinary contribution to implant dentistry globally, together with his unwavering support for the Association of Dental Implantology over a long number of years, this award is entirely appropriate in recognition of this input on behalf of the membership of the association.

‘It gives me great pleasure to present this award of honorary membership of the ADI to Carl E Misch, one of the foremost global educators in implant dentistry.’

The honorary membership was awarded at the London ADI Study Club, held at the Savile Club in London’s Mayfair, on the 8 October 2014.

Eddie Scher accepted the award on behalf of Dr Misch, which was presented by ADI President, Philip Friel.