Parents could be jeopardising their children’s oral health 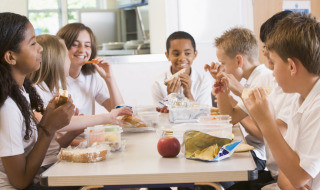 Parents could be jeopardising their children’s oral health

A new study has shown that parents could be jeopardising their children’s oral health by being unaware of what they are having for lunch.

The study, carried out by the British Dental Health Foundation, found one in 10 parents don’t know what their child eats whilst at school.

A further one in 20 parents claim their child eats fast food on their lunch break.

Chief executive of the British Dental Health Foundation, Dr Nigel Carter OBE, said: ‘Through initiatives such as the School Food Plan and the Children’s Food Trust, there are now minimum standards for all school meals.

‘Schools foods are now quite enticing and are healthy for children.

‘Schools have also clamped down on what you can and cannot put in lunchboxes, and many have banned sugary drinks altogether.

‘There’s a good chance that, in the case of parents unaware of what their child is eating at school, poor choices are being made.

‘The UK is battling against rising obesity levels, and we would encourage parents to help the issue, which will in turn help to improve oral health.

‘Although oral health in children of a school age has improved, roughly one in four has tooth decay.

‘Besides the improved school meals, an oral-friendly packed lunch is not expensive to put together.

‘It’s unrealistic to completely remove all sweet treats from a child’s diet.

‘The key is not how much you eat, but how often you have them.

‘By keeping these foods to mealtimes, you negate the damage they can do to teeth.’

Most parents were aware of what their child was eating with four in every five sending their child to school with a packed lunch or with arrangements for them to eat at the school canteen.

According to figures from the School Food Plan, uptake of school meals has remained at roughly two in every five.

1hr
|
Oral Health
Dentistry Online uses cookies to give the best experience. If you continue to use our site, we will assume that you agree to the use of such cookies. Read More.
Accept