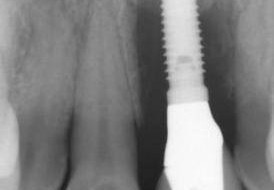 Nothing in dentistry lasts forever. Not the fancy composites, nor the gold crowns or the amalgam fillings. All the work we ever do has a shelf life from the minute the patient leaves the surgery. We assume a gold crown will last longer than a buccal composite, but one interesting treatment modality is dental implants. How long do these last for? There is much debate. Do they last longer than endodontically treated teeth? That’s an even bigger debate. However, one thing is clear, a young patient having a dental implant will most likely outlast their implant. Assume a patient is 20 years old; we give them a life expectancy of 100 years. Will a man-made object, replacing a missing part of their anatomy, last for 80 years? I doubt it.

So what’s been happening in the implant world lately? Well, most of the ‘hard core’ implant dentists will tell you, we spend a lot of our time trying to salvage and fix implant work done in the past. This is not to say the work was done badly, far from it. Sometimes, biology cannot be tamed and things will go wrong.

Here is a case that recently presented itself to me. This lovely lady had an implant done approximately 12 years ago. She has always been happy with the implant, but had recently noticed a bad taste coming from the implant itself. She hasn’t been back to a dentist since it was fitted, and is a 15-a-day smoker.

Medically she is fit and well, with no allergies and taking no regular medication.

Upon examination the UL1 was oozing pus from the gingival crevice. The patient reported no pain and there was no mobility in the implant crown.

The implant was identified as a Steri-Oss implant (a company now owned by Nobel Biocare), meaning that components would be readily available.

So in this case we have an implant, placed more than 10 years ago, in a smoker, with no follow up, no dental examinations, with acceptable appearance to the patient, but with a very localised and pronounced bone defect/bone loss. The implant is not mobile nor is it loose. What are our treatment options?

The options were discussed with the patient. Realistically, this implant is for the sharps bin, but due to it being heavily engaged in the nasal cortical plate the option to try some ‘heroic dental first aid’ was offered.

Figure 3: Appearance once the flap was raised

Figure 4: Appearance once the granulation and inflammatory tissues were removed, full extent of bone loss can be seen

Firstly, she had to quit smoking. Once the patient had managed this (for now), a flap was raised and the granulation tissue and pus was scraped away. The surface of the implant was etched, scrubbed with CHX (chlorhexidine) and then a large bovine graft was used, mixed with CaS04 and a porcine membrane. The graft was allowed to heal for three months until the soft tissue appeared healthy.

Once the soft tissue was healed the existing crown and abutment were removed and a new abutment and crown were manufactured so that the incisal edges were even.

The soft tissue appears stable and the patient no longer reports any bad taste or smell emanating from the implant. It is unknown how long the implant will survive, but it would appear that this treatment has prolonged (albeit it for a limited time) the life expectancy of this particular implant. The final appearance is somewhat compromised from the resulting gum recession, but the patient, weighing up the alternatives, was very pleased with her final restoration.

With more implants being placed than ever before, the art of repairing or stabilising failing implants is something that all implant dentists will need to become familiar with.

Figure 6: Closure of the surgical site

Dr Nilesh R Parmar BDS (Lond) MSc (ProsthDent) MSc (ImpDent) Cert Ortho was voted Best Young Dentist in the East of England in 2009 at the Dentistry Awards and Young Dentist of the Year at the Dental Awards 2014. He has also been voted 18 in 2014’s Dentistry Top 50. Nilesh has a masters degree in prosthetic dentistry from the Eastman Dental Institute and a masters degree in clinical implantology from King’s College London. He is one of the few dentists in the UK to have a degree from all three London Dental Schools and has recently obtained his certificate in orthodontics from Warwick University. His main area of interest is in dental implants and Cerec CAD/CAM technology.

Currently studying for his MBA at Imperial College, London, Nilesh runs a successful seven-surgery practice close to London and is a visiting implant dentist to two central London practices. Nilesh has a never-ending passion for his work and is famed for his attention to detail and his belief that every patient he sees should become a patient for life. He offers training and mentoring to dentists starting out in implant dentistry, more information can be found on his Website: www.drnileshparmar.com