Recently, I received the following question from a reader: ‘Do you have an article or crib sheet that would take me through the necessary factors to consider to perform a RCT for a patient?’

It is beyond the scope of an article to comprehensively cover all the topics listed in the doctor’s question. Nevertheless, it is possible to cover the essential elements of chemo mechanical preparation with the goal of highlighting strategies that can make canal enlargement as predictable as possible. This paper will address the key conceptual and technical elements of predictable canal enlargement with an emphasis on reducing or eliminating iatrogenic problems. We will assume that all of the pre-operative planning, examination, consent, and steps needed to make the patient ready for treatment and begin access have been carried out adequately.

1) Creation of straight-line access, irrespective of the clinical case.

While some doctors may wish to conserve tooth structure, it is problematic to instrument, irrigate, and manage the apical third of root canal systems without creation of a straight-line access (SLA). SLA implies that all of the canals can be viewed in one mirror view and that all of the files used in canal enlargement can be inserted into the canal with minimal contact of the canal wall and not be engaged by the cervical dentinal triangle. Ideal access is needed for optimal canal location. To keep access ‘conservative’ in the interest of later preventing fracture is to choose the greater of two evils. Tactile and microbial control over the apical third is problematic if the coronal access is too small. The orifice in this context acts as the gatekeeper to the entire canal, manage it correctly and the canal can be instrumented properly, the converse is true.

It is axiomatic that the greater the amount of light and magnification that can be projected into the access, (under a rubber dam), the greater the degree of control over all segments of canal enlargement. The surgical operating microscope (SOM, Global Surgical, St. Louis, MO, USA) is invaluable as a tool to create the greatest access into the tooth. There simply is no adequate substitute for the SOM at this time. The elevation in quality is considerable over loupes or the naked eye. For example, in the insertion of hand or rotary nickel titanium (RNT) files, having the ability to magnify the orifice and directly and intentionally place the file into the canal without guesswork cannot be overstated in its creation of efficiency and precision (Figure 1).

2) Management of the orifice is designed to create a pathway into the deeper regions of the canal.

The orifice must be minimally enlarged but enlarged none the less to allow:

a) Removal of the cervical dentinal triangle

b) Tactile control over instruments

e) Enlargement of the orifice to a degree which provides maximum access taking into account the pre-existing width of the root, the degree of fluting, the root length, the desired taper throughout the root, the anticipated final master apical size and minimize the risk of cervical perforation.

Orifice size is intimately related to the creation of ideal canal shapes in that whatever orifice size is created the remaining canal preparation must have narrowing cross sectional diameters down the canal from the orifice to the apex to avoid a ‘coke bottle’ prep which is exceptionally wide at the top and narrows rapidly. Such preparations predispose roots to fracture, minimize tactile control, promote apical blockage, and reduce the capabilities for adequate irrigation, amongst other iatrogenic possibilities.

In general, large, relatively straight, and wide roots can and should be enlarged to a greater taper (.10, .12 taper at the orifice and .06 along their length) than a smaller, more narrow and curved root (.08 at the orifice and .04 along their length). What must be remembered is that it is not just the taper used but how far down the root, the tapered instrument is taken. Using a .12-tapered instrument just at the orifice might be an ideal shape in some roots and if taken 5 mm below the orifice, such a taper can remove excessive quantities of dentin with the aforementioned negative results. Caution is advised and clinical judgment is required.

Rotational speeds can influence orifice sizing. Higher rotational speeds may be consistent with greater efficiency in canal preparation for some file brands, this said, with others this may increase the chance that the file may ‘screw into’ the root and if this occurs, may increase the chance for over enlargement of the orifice and possibly perforation especially in a thin furcation. I use the K3 shapers (SybronEndo, Orange, CA, USA) for their robust cutting ability, lack of screwing in and excellent tactile control, they are available in three tapers, .12, .10 and .08 and have a fixed 25 tip size (Figure 2).

3) Instrumentation is inherently crown down.

This frame of reference should include a cognition of the taper being prepared blended with the risk of strip perforation and the needed degree of canal enlargement throughout the length of the root. It is vital throughout not just access, but also coronal third enlargement, to remove all chips of detain and debris that arises from all stages of the process, in other words, debris that forms as result of instrumentation must be removed immediately so that it is not propelled down the canal.

Again, visualization of debris and its removal is made significantly easier with the SOM. When using OO in the coronal third for example, after each insertion of the OO, irrigation and recapitulation with a small hand file should be accomplished to make sure that no debris is propelled apically. Recapitulation is defined as taking a hand K file through the previously instrumented canal space to make certain that the canal has been cleared of debris and is open, patent, and negotiable. Generally, while recapitulation is carried out with #6-#10 hand file, none of these is inherently better for the task than any other file.

Canal anatomy is diverse, some canals may allow the insertion of an OO deep into the canal and others will allow minimal if any insertion. As a guideline, canals should be open to at least a size #15 hand file before the use of a RNT file. In many teeth, this minimal diameter may need to be created first or alternatively; the canal may be open enough to be enlarged with an orifice opener. What is most important in the use of OOs and all RNT instruments is that the files be inserted gently, passively, minimising engagement to 1-2 mm per insertion. Such a minimal engagement will prevent their tips locking and reduce the chances for strip perforation.

In practical terms, using the K3 shapers, the .12 is inserted first, the .10-second, and the .08 last. Smaller canals might require only .10 and .08 tapers used in succession. This pattern of insertion is inherently crown down in that each shaper will move progressively further down the root. For most canine tooth and palatal canals, distal canals of lower molars, .12 taper is appropriate. For most MB and ML canals of lower molars and MB and DB canals of upper molars a maximum taper of .10 is indicated. For lower anterior teeth, .08 taper is generally enough. While these are general guidelines for the best taper, they are clinically relevant for most teeth seen in general practice for routine endodontics (Figure 3).

Movement into the middle third is done with a pattern consistent with the coronal enlarging, i.e. the canal is negotatiated by hand first, to assure patency, then the glide path is created and then and only then are RNT files entered into the canal. These RNT files are generally inserted crown down, i.e. from larger tapers to smaller and from larger tip sizes to smaller tip sizes. With this pattern of enlargement, each successive RNT file will progress further down the root to enlarge the canal. In smaller and more curved roots, smaller tapers will be required for enlargement and in larger and more curved roots, larger tapers are possible. A typical sequence for the middle third of a root will be .06 35, 30, 25, etc. or the same tip sizes with a .04 taper, but in any event as the clinician moves apically, this pattern of using diminishing tip sizes can allow the clinician to progressively and passively enlarge the canal as safely as possible.

After each insertion, the clinician ideally irrigates and recapitulates the canal. If for example, the .06 #35 does not want to progress apically, the clinician simply moves to the #30, and so forth down the canal until progress apically is made. Again, the insertion of these RNT files is gentle, passive, and done with minimal engagement of the flutes of the file. The file is never pushed to an arbitrary depth in the interest of speed or efficiency. Each insertion should ideally take about 2-3 seconds and the file should then be withdrawn. The file is moving upon entry and should never be left stationary in the canal. The K3 Procedure pack in either .06 or .04 taper can provide the necessary tip sizes to enlarge the canal in the manner described above (Figure 4).

Appreciating the curvature of canals, through hand negotiation, can allow the clinician to make needed modifications in taper or tip size of a given RNT instrument. Once the first hand file reaches the estimated working length, the true working length is determined with an electronic apex locator (Elements Diagnostic unit, EDU, SybronEndo, Orange, CA, USA).

It is important to realise that techniques for highly curved and challenging apical third anatomy do not change relative to more straight and less challenging canal spaces. Hand exploration comes before RNT use. These hand files are precurved as described before. A glide path is always created before RNT files are entered into a canal space. Engagement of RNT files is minimal on any given insertion, 1-2 mm and RNT file use is gentle, passive and if a file does not want to advance, a smaller taper or smaller tip size is used until the desired apical depth can be reached (Figure 5-6).

Strategies for the enlargement and irrigation of canal spaces have been presented to help the general practitioner in daily practice. Emphasis has been placed on the vital importance of using small hand files to negotiate canal spaces and create glide paths before RNT file use as well as irrigation and recapitulation after every RNT insertion. These RNT insertions are ideally from larger tapers to smaller. I welcome your feedback.

Squaring the circle: believe in the science for minimally invasive tooth restoration 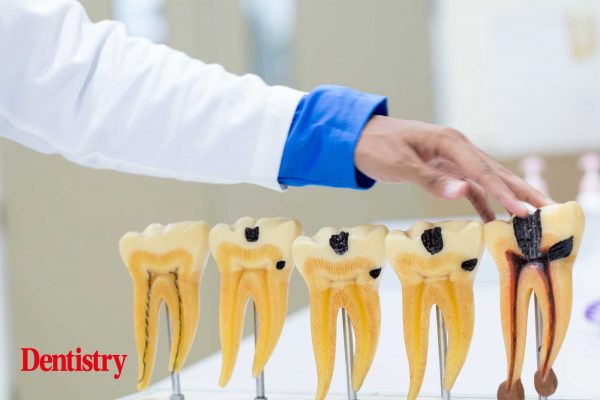 2d Endodontic Practice
Dentistry Online uses cookies to give the best experience. If you continue to use our site, we will assume that you agree to the use of such cookies. Read More.
Accept