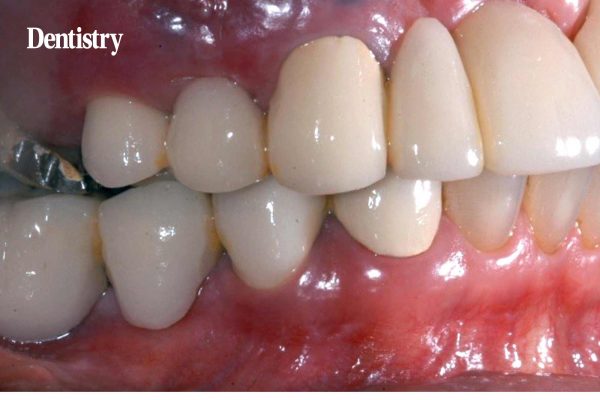 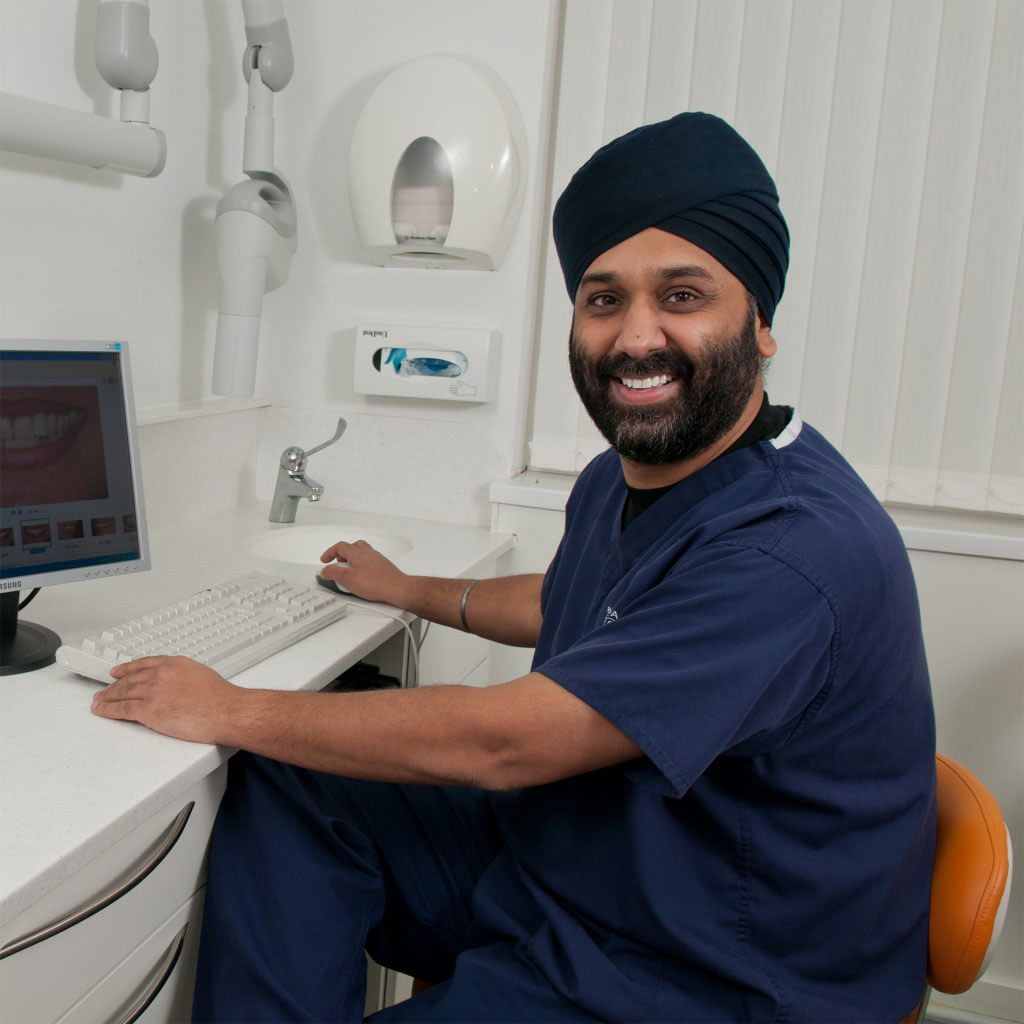 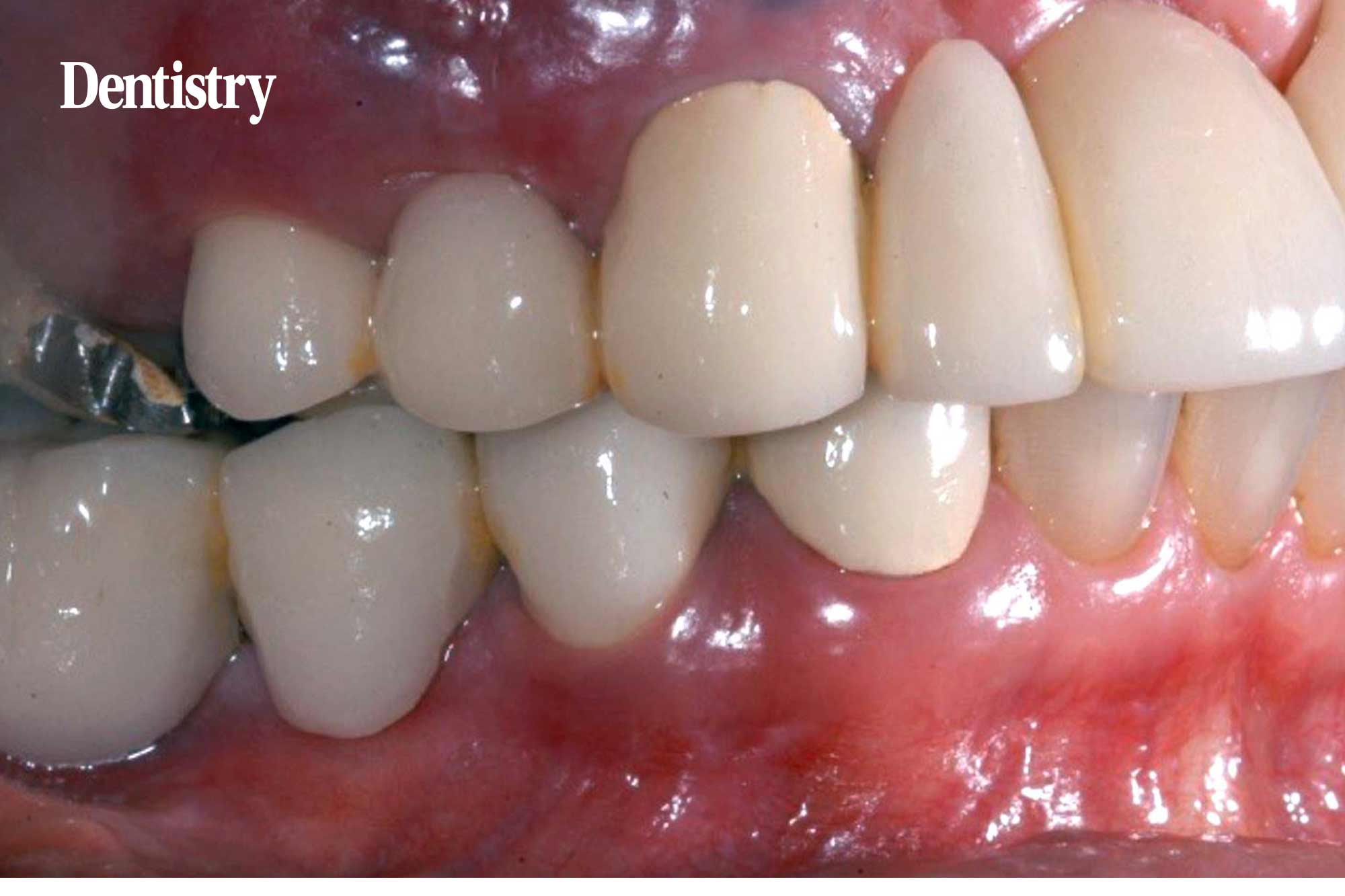 A patient was initially referred to us for full arch reconstruction with guided surgery in 2006. She presented with failing upper bridgework, which was partially implant-retained. There were multiple problems, including failed apicoectomies, fractured roots, and the two anterior implants were failing as well (Figures 1-3).

The treatment options discussed with the patient were to either do nothing for as long as possible or to replace all existing restorations and implants. As the patient was keen to find a solution sooner rather than later, she chose the latter option.

A full clinical assessment was conducted with radiographs (Figures 4 and 5) and photographs. The only good tooth remaining was the upper right canine, but other than that, the natural upper dentition had a hopeless prognosis and was unrestorable.

A very large lesion was detected on the UL5, the UL3 was apicoectomised and both the anterior implants were positioned very poorly, which had affected the smile aesthetics with a midline shift to the left. These implants had been placed about 13 years previously, so they featured very old designs.

The treatment process was explained to the patient and informed consent obtained to proceed. The existing implants were removed (Figure 6), as were the few remaining natural teeth.

As poor bone quantity had been identified in the assessment radiographs, bone augmentation was indicated if we were to place new implants with a good level of primary stability.

The procedure was performed at this time around the implant site to preserve the sockets and in the upper left quadrant.

This was left to heal for about six months, during which time the patient was provided with a removable temporary denture.

After this healing time period, the patient returned to the practice for a follow-up CT scan and wax-up, which was used for the guided planning process of the implant placement. The ideal implant positioning, angulation, length and width were determined using Simplant software.

On the day of surgery, mid-crestal and midline reliving incisions were made (Figure 7) and a full thickness mucosal flap was retracted back.

A bone-supported guide was used (Figure 8) to place six Astra Tech dental implants (Figure 9), which at that time enabled the guided planning process with Simplant software. The flap was closed and sutured (Figure 10).

Six multi-unit abutments were then placed (Figure 11) in preparation for the new screw-retained bridge. The postoperative X-ray demonstrated good positioning of the implants, which were all parallel to each other (Figure 12). The bridgework was fabricated (porcelain fused to Cresco gold framework), once again utilising compatible products.

Due to the effective angulation of the implants, there was no need to angle the screw channels and we achieved a very passive fit for the bridgework. In this time, two implants were placed in the LL5 and LL6 areas, which were restored with two splintered crowns (Figure 13). The lower right bridgework was left alone despite the distal cantilever, as it was causing no problems at all.

Several try-ins of the upper bridge were conducted with the patient in order to achieve the right aesthetics. Once the patient was happy, she went on her way.

After about a year – during which time the patient saw her routine dental team for check-ups and general care – she returned to our practice for her annual clinical review, involving X-rays and full six-point pocket charts on every tooth and implant.

The restorations still looked great (Figures 14-17) and the patient reported no issues.

The patient continued to frequent her routine practice to ensure ongoing maintenance of the dental implants and restorations and to help optimise her oral health.

She also had access to our dental hygienist at BPI Dental on a yearly basis to support this maintenance programme.

Around 10 years after we performed the surgical treatment, we were lucky enough to see the patient again. As shown in the photos, the restorations still looked great (Figures 18-20).

There had been very little soft tissue change. The aesthetics were fantastic, so the patient was still delighted with the final outcome.

This case highlights a few important aspects worthy of note. First, we don’t always need to rush treatment. This case required treatment over several months and the final outcome was highly appreciated by the patient.

As in all dental implant cases, the presented case emphasises the importance of excellent maintenance by the patient.

Only by attending ongoing review appointments and adhering to strict hygiene routines at home can patients enjoy long-lasting results.

Finally, this case demonstrates the superior aesthetics of porcelain both in the short- and long-term.

I don’t think it can really be bettered and therefore it would remain my gold standard restoration material wherever possible.

The author would like to thank Dr Tuss Tambra for the prosthetic work in this case. Also, Steve Tyler Dental Laboratory (Gloucester) for its excellent technical work.

This article was first commissioned for Clinical Dentistry magazine. To sign up and receive upcoming issues of the magazine, visit www.fmc.co.uk/shop/clinical-dentistry.

59d
|
Implant Dentistry
Dentistry Online uses cookies to give the best experience. If you continue to use our site, we will assume that you agree to the use of such cookies. Read More.
Accept