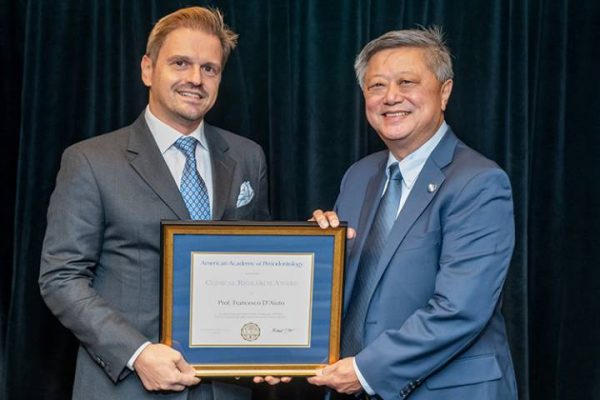 Professor Francesco D’Aiuto and his periodontics team from UCL Eastman have won the 2019 Clinical Research Award from the American Academy of Periodontology (AAP).

This prize recognises an outstanding scientific article which has direct clinical reference to periodontics.

The team won for their recent paper which showed that treating gum disease may help lower blood glucose level.

They also showed it can reduce chronic inflammation in those with type 2 diabetes.

The findings have already led NHS England to recommend screening these patients for gum disease as standard.

It is the second time the same team has been recognised by the AAP.

The team also received the award in 2005.

Pictured: Professor D’Aiuto receives the award from Dr Richard Kao, president of the AAP at the  AAP conference in Chicago, USA.