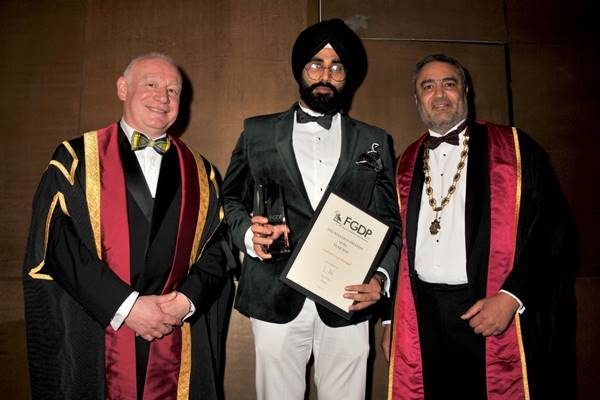 The awards were made to GDPs, nominated by their dental peers and colleagues, in three categories.

Simrath Singh Mangat won the Foundation Dentist Award, which is open to all GDC-registered dentists in a Foundation Training post, and focusses on all-round performance.

Nominated by the South East London Deanery, he received the award for evidence of excellent clinical and soft skills, combined with support for broader interests.

These included supporting young dentists with communication at interviews, digital and social marketing for his practice, and even leadership of teams at national dance competitions.

Michael Brown and Joshua Jackson were both Highly Commended; Michael in recognition of his excellent communication skills, professionalism and eagerness to improve the quality of patient care, and Joshua for demonstrating an exemplary level of commitment and engagement during his tenure as a foundation dentist.

Mohsan Ahmad was the winner of the Faculty’s Community Contribution Award, which recognises GDPs and DCPs who have made a significant contribution to improving oral care in their local community.

The award was presented in recognition of his involvement in improving oral health and access to dental care for children, adults and marginalised groups in the Greater Manchester area since 2008.

The Dean’s Award was presented to Nigel and Victoria Milne, GDPs from Dunoon, in recognition of their charitable work in northern Malawi.

Since their first trip there in 2012, they have provided emergency dental treatment and raised funds for a community where resource is lacking – there are just 26 dental therapists for a population of four million.

Their charity, Smileawi, also facilitates groups of self-funded UK volunteers to travel to Malawi and carry out free pain clinics, and supports local dental therapists through education and donations of materials and equipment.

The winners were announced during the FGDP(UK) Annual Dinner, held at The Mayfair Hotel in London on Friday 15th March.

They were presented by the faculty’s vice-deans, Onkar Dhanoya and Mark Richardson, and its dean, Ian Mills, who said: ‘Congratulations to all of our winners. Their outstanding achievements highlight the hard work and dedication of general dental practitioners to patient care, not only in their daily practice, but also in their communities and the wider world.’