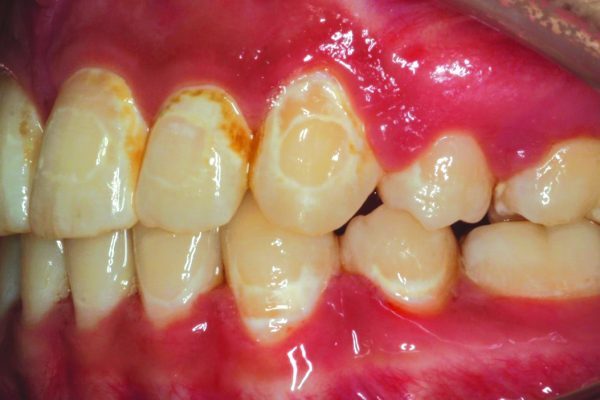 Young patients wearing fixed orthodontic appliances run a higher risk of caries than those who do not. If decay develops during the orthodontic treatment, then white spot lesions (formed by demineralisation of the tooth enamel around the brackets) can appear and damage the newly straightened teeth.

Biomin F, a new toothpaste based on bioactive glass technology, was already shown to be effective in remineralising tooth enamel and improving symptoms of sensitivity (Sivaranjani, 2018). Now, a new study has shown that the effects penetrate even deeper into the tooth – remineralising the sub-surface enamel and improving or reversing the white spot lesions (Bakry et al, 2018).

The researchers artificially prepared demineralised lesions around orthodontic brackets, and compared the remineralising performance of Biomin F, fluoride gel applied for both four minutes and 24 hours, and a control group.

They hypothesised that the low fluoride content of the Biomin, released slowly over several hours, allowed the penetration of the calcium and phosphate ions through the porous enamel sub-surface, effecting the successful remineralisation of the demineralised enamel lesion.

Biomin F is based on the latest generation of bioactive glass technology, developed in the laboratories of Queen Mary University, London. Unlike toothpastes containing soluble fluoride, the structure of Biomin F acts as a reservoir of fluoride, calcium and phosphate ions, which adheres to the teeth after brushing and slowly release the ions over 12 hours.

They work with saliva to rebalance the acidity in the mouth and produce fluorapatite (the fluoride analogue of natural tooth enamel), restoring both the surface and the sub-surface layer of enamel.

Fluorapatite is more stable and resistant to acid attack than hydroxyapatite, formed by earlier generations of bioactive glass.

The slow-release formula enables Biomin F to be effective over a prolonged period, unlike pastes based on soluble fluoride, which are rapidly rinsed away by saliva.

Additionally, the tiny particles of Biomin F are able to enter into the dentinal tubules where they adhere to the apatite-rich walls of the tubules, occluding them by developing new mineral to reduce dentine hypersensitivity.

A further benefit of Biomin F, particularly useful when dealing with youngsters, is its ‘smart’ effect: in the presence of a lowered pH (after consumption of an acidic drink, for example), it dissolves sooner and kickstarts the production of protective fluorapatite.

The performance of Biomin F in halting and reversing the development of white spot lesions, means it has an important part to play in supporting orthodontic treatment.

A resin incorporating Biomin bioglass for cementing orthodontic brackets is currently being developed, which will slowly release fluoride, calcium and phosphate while in the mouth, protecting the teeth during the orthodontic treatment.