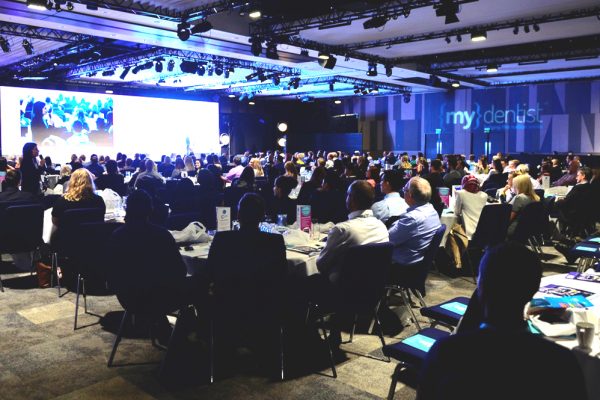 Seb Evans went along to Mydentist’s Clinical Conference in Birmingham recently where there were more than 600 delegates waiting to hear about the company’s plans for the future.

It’s not often that a group of dental practices grows large enough to host its very own conference. Even when it comes to corporate bodies, few are big enough to invite more than 600 delegates made up of members from the whole dental team for a day away from the dental practice.

Mydentist is different though, and being one of the largest groups of dental practices in the UK means that this year marked the fourth Mydentist Clinical Conference.

The conference, now a regular date in the Mydentist calendar, has become an annual event giving those in the boardroom an opportunity to meet with dentists and dental professionals, reflect on the previous year and outline what the plans are for the next year. It also gives dental professionals a chance to give feedback and suggestions on what they would like to see from the company.

The exhibition in the welcome hall also gives dentists the chance to speak to manufacturers about some of the latest products on offer, all whilst being served coffee and breakfast. After running for four years many delegates had attended previously, meaning expectations were high and the organisers certainly didn’t disappoint.

‘Today is about communicating the changes that have gone on in Mydentist over the last 12 months,’ Dr Julian Perry, group commercial director at Mydentist, said. ‘Mydentist has had a reputation in the past for not being so good in some people’s eyes. The new executive team has come in with a new group, swept clear and we’re now listening to dentists and making positive changes. There’s a huge amount of investment we’re putting into our dentists, listening to the dentists, looking at clinical activity, looking at how we can support dentists in their local communities.

The conference itself started with Tom Riall, CEO of the IDH Group, which runs Mydentist. Tom immediately outlined his plans for the company, saying: ‘My aim is to make Mydentist the best place to work.’ He pointed out that ‘Mydentist doesn’t say thank you loud enough’ before thanking all the attendees for the all the hard work they had put in over the previous 12 months.

Some of the Mydentist stats make for impressive reading. There were four million people treated across 10 million appointments over the last year and 94% of patients would recommend Mydentist. Staff are also very happy, with an 80% staff retention rate.

Reflecting on previous years, Tom pointed out that Mydentist had made the mistake of ‘growing too quickly’. Headlines in the dental media over the past year have reported on the closure of Mydentist practices and the corporate’s lack of acquisitions. But Tom reassured those attending the conference that by the end of the year Mydentist will stop closing, merging and selling its existing practices and may even start looking to expand again.

Looking to the future, Tom pointed out that there are ‘good things happening at Mydentist’. He highlighted six key areas for the company:

Tom summarised his presentation by saying to the delegates present: ‘I’m excited about the future and I want you to be a part of it.’

Next up in the lecture hall was Dr Nyree Whitley, regional clinical director at Mydentist, who was joined on stage by Steve Melton, managing director at Mydentist. The two speakers went around the hall introducing some key Mydentist partners, the services they offer and how they can help practices in the room.

It was a great opportunity to hear more from some of the partners around the room and to hear their plans for next year. One of the stand out talks came from Paul Adams, new managing director at Dental Directory. He started his talk by pointing out that the Dental Directory service delivered up to now has not been good enough. He pointed out that the Dental Directory wants to be innovators, to do things differently and to be a one-stop-shop, offering everything under one roof. He promised that things will improve and become quicker and more streamlined. Paul pointed out that Mydentist practices would be one of the main beneficiaries of that improvement.

And the winners are…

More than 750 nominees from Mydentist battled it out to achieve one of the much-coveted Excellence Awards 2018.

Winners of the nine categories were revealed at the gala dinner during the Clinical Conference in Birmingham.

Among the winners were Love Your Smile Orthodontic Centre in Leeds, which scooped Practice Team of the Year, and Meabh Brady who was awarded Young Dentist of the Year.

The CEO’s award for Outstanding Contribution went to Ingrid Perry, practice manager of Mydentist’s Holderness Road practice in Hull, who is also in line for an MBE thanks to Teeth Team, a charity she set up to tackle the cavity crisis in children’s dental health.

The winners from the night include:

Nyree Whitley, group clinical director of Mydentist, said: ‘Congratulations to everyone nominated at this year’s Excellence Awards. Competition was exceptionally tough, so it’s wonderful to see so much fantastic work being carried out within Mydentist that’s making a difference to colleagues and patients.

‘I look forward to making next year’s Excellence Awards even bigger and better.’