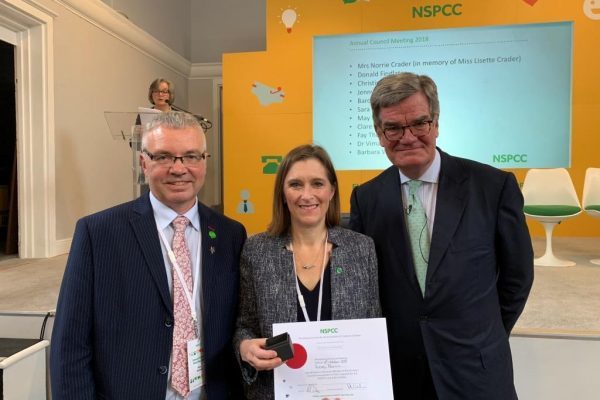 Jenny Harris, who works in Community and Special Care Dentistry and at the Charles Clifford Dental Hospital at Sheffield Teaching Hospitals NHS Foundation Trust, has been given the award by the NSPCC in recognition of the difference that she has made to children.

She has served on the NSPCC’s Health Liaison Committee for more than 11 years, and has made a significant contribution to the development and promotion of safeguarding practice in dentistry.

‘Honoured to received this award’

Jenny, who is also an honorary senior clinical lecturer at the University of Sheffield, said: ‘I am very honoured to receive this award, and am also grateful to all my colleagues for their on-going support with safeguarding in dentistry, which underpins my interest and ability to get involved with national work.’

Christopher Cloke, Head of Safeguarding in Communities at the NSPCC, said: ‘This award recognises Jenny’s valuable contributions to not only our Health Liaison Committee, but the fact that without her dedication and enthusiasm safeguarding would not have been promoted to the extent that it has within dentistry. Her promotion of dental neglect as a possible indicator of wider child neglect is truly groundbreaking.’

Jenny was instrumental in the launch of the safeguarding guidance Child Protection and the Dental Team (CPDT) back in 2006, which has subsequently gone on to become a key part of national guidance and been translated into a number of other languages.

Prior to that, there was very limited safeguarding guidance in paediatric dentistry, and Jenny was motivated to produce the guidelines after seeing lots of children with neglected teeth through her work in a community clinic.

Jenny said: ‘Dental professionals often get to know families well, so it is important that we know what to do if we have concerns about a child’s welfare or if we notice that a family is struggling and needs extra support.’

As well as her role with the NSPCC, she has also authored national clinical guidelines and policy documents on dental neglect in children, led working groups on the adaptation of standardised child protection training for specialist dentists and convened national working groups on safeguarding children in dentistry.