Zooming in on whitening 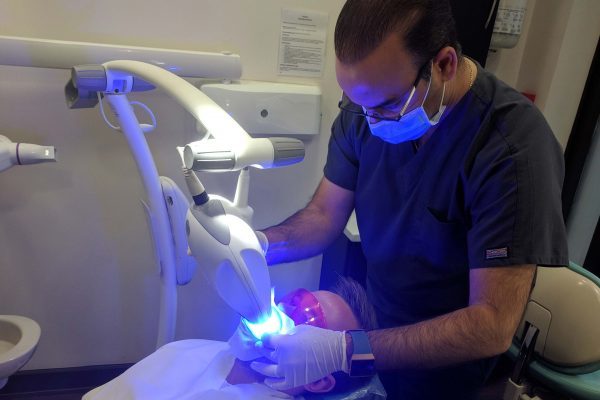 Zooming in on whitening

Seb Evans speaks to Zaki Kanaan about how offering Philips Zoom! whitening can really help to build your practice.

Tooth whitening is a booming market. It is estimated to be worth around £40 million worldwide with predictions that it will continue to grow as celebrities endorse whitening kits.

New tooth whitening launches seemingly happen on a weekly basis, with so many whitening products on the market, it can be confusing for dental professionals and patients alike to choose which kit would be best for them.

One of the most popular whitening brands currently on the market is Zoom! whitening from Philips. We went to speak to Zaki Kanaan to find out why he puts his trust in Philips Zoom!

At home versus in practice

Patients today can be very demanding and do their research on treatments before they come to the practice. Tooth whitening is no exception, patients shop around for the best whitening experience for them. Many products either offer in practice whitening, or at home whitening, Philips Zoom! offers both.

With Philips Zoom! in-office whitening, patients can receive an hour’s treatment in the practice using the Whitespeed blue LED lamp and the advanced whitening gel. This helps to give patients an initial boost so they will leave the practice with whiter teeth immediately. After this, Zaki recommends patients use at-home whitening kits to finish off the treatment.

It’s this full package that makes it stand out from the rest. Zaki believes that many patients are switching dentists purely because their practices are only offering at home whitening.

‘I work in the city, if I said to a banker: “Here’s a tray, use this for three weeks”, they’d respond by saying: “I’ve come to you, I want you to do it”. You’re going to lose business’, Zaki says. ‘Practices that only offer home whitening don’t realise patients are switching. I know about it, patients come to us saying: “I’ve been with my dentist for 20 years, but they only offer home whitening so I’ve come to you”. Patients come in and think this is a nice practice, they enjoyed a movie whilst having whitening, and so they stay. But they don’t call up the practice they’ve just left and explain why they’re leaving.’

Zaki believes patients are actively seeking out in-practice whitening, a dental professional starting the process gives them a certain peace of mind giving the impression the patient is getting better value for money.

Philips is a huge brand worldwide. Philips has integrated into every part of our daily lives and there is a certain amount of trust that goes with becoming such a big brand. This extends into healthcare and Philips is already well known for its Sonicare and Airfloss oral health products. Philips Zoom! whitening is no different.

‘Patients know Philips’, Zaki explains. ‘It’s a trusted brand for healthcare. It’s a trusted brand from the patient’s perspective but also from a professional’s perspective. No other company ticks all those boxes. Some patients come in already knowing about the Philips Zoom! product. They ask specifically for Philips Zoom! Other people won’t know anything about whitening, but when you say it’s Philips they recognise the brand. There’s already trust.’

The Zoom! name is synonymous with whitening ever since it was featured on Extreme Makeover in the USA. Since then it has become a practice builder, so many patients know the name that they seek out Zoom whitening. There aren’t many other whitening brands that can offer that popularity.

‘A lot of people have this idea that Philips must be expensive when it’s actually not,’ Zaki says. ‘Dentists may not want to fork out for the light, but that will go on forever, it doesn’t expire. Once you’ve offered four Philips Zoom! in-office treatments, you’ve paid for the light. After that, it costs less than its competitors.’

One of the treatments patients really shop around for is teeth whitening. ‘They phone several places and they’ll come to you for whitening. They like the practice and end up thinking: “Well I’ve got a missing tooth”, and ask about other treatments.’ Offering whitening can be a real practice builder, for NHS or private practices.

Another benefit of offering whitening is it’s something the rest of the dental team can get involved in. ‘The dentist shouldn’t be the one offering this, it should be your hygienist,’ Zaki explained. ‘Usually, the Philips Zoom! whitening treatment goes for around £500. Your hygienist could be making more for the practice and can expand their skillset. It will also help your hygienist feel more valued.’

Philips offers dental professionals more flexibility with its product range. For example, if patients complain they have sensitive teeth, Philips has a solution – Relief ACP. The Whitespeed LED also has three settings, meaning you can reduce the intensity for those with severe sensitivity. ‘Philips offers more than just whitening,’ Zaki says. ‘It’s one company and you’ve got home whitening, day whites, you can do it during the night. You’ve got light activated and you can do sensitivity trays as well. You can offer it over different periods of treatment times.’

How to find out more

Zaki Kanaan has a huge amount of experience, not only in delivering whitening but also lecturing on the subject. ‘The reason I got into whitening was because one of our hygienists said they didn’t know anything about whitening and hygienists were allowed to offer it then,’ Zaki explains. ‘So I put together a lecture and offered it to a group of hygienists. We did a bit of hands on, they practised it on each other. Afterwards other hygienists were asking whether I could lecture them and it took off from there.’

Since then Zaki has become a key opinion leader for Philips and lectures regularly about the benefits of offering whitening at dental practices. ‘I have a 20-minute slot at the Private Dentistry Show for Philips. I will be talking about the frequently asked questions people have about whitening, such as how to deal with sensitivity.’