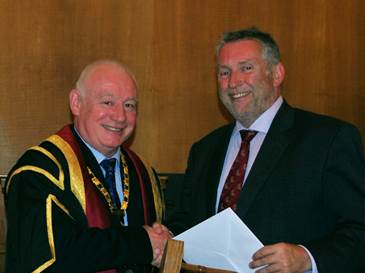 The FGDP(UK) has announced Ian Mills as its new dean, with Onkar Dhanoya and Mark Richardson being announced as vice deans.

Ian, who works in general dental practice in north Devon, has now been sworn in following his election in February, and succeeds Dr Mick Horton as dean.

Qualifying as a dentist from Glasgow University in 1987, he spent the early part of his career working in maxillofacial surgery.

After moving into general practice, he joined the Faculty of General Dental Practice (UK) (FGDP(UK)) in 1994, completing its diploma in implant dentistry, representing the south west region on the board and becoming a vice-dean in 2016.

‘On behalf of all members of the faculty, I congratulate Onkar and Mark on their election as vice-deans, and offer our wholehearted thanks and appreciation to Mick for his hard work and strong leadership over the last three years,’ Ian Mills said.

‘Under his deanship, FGDP has increased its influence, strengthened its world-class education and re-vitalised its fellowship programme, fit for the future ahead of us.

‘It is a great responsibility to lead the UK’s only professional body dedicated to general dental practice, and a huge privilege to be able to draw upon the immense talents, knowledge and expertise of our members as we move forward together to establish a new College of General Dentistry as the academic home of GDPs.’

Onkar has been principal dentist at Honour Health (formerly Osborne Dental Group) since 1986, providing treatments including dental implants, facial aesthetics and orthodontics at its three practices across the north east.

Graduating from Newcastle University in 1985, he represents the Yorkshire and Northern region on the FGDP(UK) board, and holds fellowships both of the FGDP(UK) and the International College of Dentists.

After graduating from Dundee University in 1988, Mark joined the RAF, of which he is now a group captain and the chief dental officer.

He is also the armed forces clinical adviser on paedodontic dentistry, in which he holds an MSc, and has completed an MSc in medical education and attained MGDS RCS.

In 2007 he became an examiner for the MFGDP, in 2013 a core group MJDF examiner, and he is also a facilitator for the FGDP(UK) fellowship.