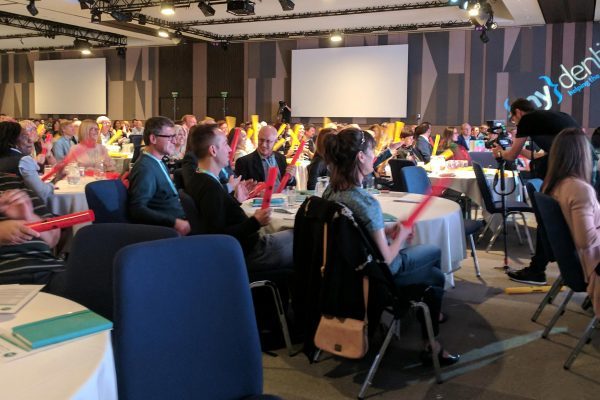 Seb Evans attended the Mydentist Clinical Conference to better understand what goes on at their annual event.

Utter the phrase ‘clinical conference’ and some people will shudder at the thought, whilst others will jump at the opportunity. There are lots of clinical conferences competing in the dental calendar at the moment and sometimes it can be difficult to tell which ones are worth attending.

Mydentist, one of the UK’s largest dental corporates, recently ran its own annual Clinical Conference in Birmingham, open to all Mydentist teams in the UK. The two-day conference, presented by England Rugby’s World Cup winning Kyran Bracken OBE, included talks from directors at Mydentist, keynote speakers such as Ashley Latter, breakout CPD sessions and £80,000 worth of prizes given away on the day.

‘I think it’s massively important to get all of our clinical community together, our dentists our nurses, along with all of our operational team,’ Tom Riall, CEO for the IDH group explained when asked why Mydentist was running this clinical conference. ‘It’s a great way to spread best practice, it’s a great way to share the future direction of the company. But most of all it’s a chance for the clinical community to network and exchange thoughts and ideas.’

Tom Riall was the first to take to the stage at the conference, his first Clinical Conference as the CEO of the IDH group. This was his chance to introduce himself to the 700 delegates that had come along to the day.

He started by pointing out that no other dental corporate would be able to put on such an event and outlined why delegates should be proud to work for Mydentist. Tom pointed to the high standards Mydentist practices can offer its patients, he highlighted the exciting future Mydentist has ahead, including rolling out digital radiographs for all of its practices by the end of the next financial year.

On average, Mydentist receives only two complaints, per year, per practice, which becomes even more impressive when you consider Mydentist includes a network of over 650 practices treating more than eight million people around the UK.

Despite this there are also some difficulties on the horizon. A fall in the number of patients visiting for NHS dentistry resulting in the number of UDAs fulfilled falling to under 90% of the contract value for some practices, is one such problem. There are also the issues associated with recruitment and how Brexit may affect this. Tom was quite frank about this and he suggested Mydentist has grown too quickly in recent years (70 practices acquired in one year at its height) and that now is the time for consolidation. There is a new clinical director at Mydentist and Tom explained that the company is going in a new direction.

‘This morning has just been brilliant, absolutely electrifying,’ Tom Riall told Dentistry magazine, when he had finished on stage. ‘I don’t think there’s another dental services company in Europe doing anything like this. To me it just completely blows away any of the myths that might be out there about corporate dentistry. This is highly professional.’

Along with other Mydentist directors, there were entertaining talks from Sandra White, director of dental public health at Public Health England, and John Milne, dental adviser at the Care Quality Commission. John gave advice to delegates on how to remain compliant. The CQC isn’t there to punish dentists who aren’t adhering to guidelines, John explained, it’s there to build a dialogue with dentists and to help practices maintain the high standards most already reach.

There were also passionate speeches from Mydentist employees. Shamlakham Aly gave an emotional story about when she first moved to the UK as a dentist. Many principals looked to take advantage of her situation, whilst others didn’t bother offering her a chance because it required too much administration in terms of GDC registration. Mydentist offered her the chance, however, and has since gone on to help her develop as a dentist.

Alongside the talks there was an exhibition running all day for delegates to find out about the latest dental equipment and win some prizes. There was a competition to win an iPad. To win, delegates needed to generate enough power to boil a kettle in the shortest amount of time by cycling a stationary bike.

In the evening on the Friday, Mydentist hosted its gala dinner, presented by Lucy Porter.

Time is tight for most dentists around the UK and it can be difficult allocating enough time for days out at clinical conferences. For those working for Mydentist, however, the Clinical Conference is a must. The day offers inspirational and motivational talks along with CPD. With a gala dinner and awards and entertainment, there’s no reason this shouldn’t be added to the whole team’s dental calendar next year.