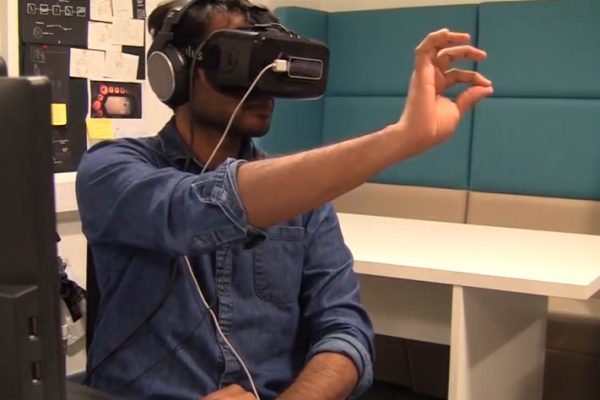 A team of researchers at the University of Huddersfield are developing new ways of using virtual reality to train dental surgeons.

The technology will provide close-up, stereoscopic 3D views of procedures in a 360-degree virtual operating room without the sightline problems that can arise in a crowded operating theatre.

When perfected, this technique could play an important role in improving surgical training on a global scale.

The VR surgery project has been triggered by PhD candidate, Yesh Pulijala.

A qualified dental surgeon who became aware of the limitations of conventional training, he is focusing on the use of virtual reality to train surgeons.

He is supervised at the University of Huddersfield by Professor Minhua Ma, a leading authority on the use of serious computer games for the purposes of health education and training.

She and Yesh co-authored a chapter about VR surgery – described as ‘an immersive virtual reality operating room experience’ – that appears in a new book called Serious games and edutainment applications Vol II, co-edited by Professor Ma.

Yesh Pulijala is co-supervised by Professor Ashraf Ayoub of the Dental School at Glasgow University, and he is enabling the recording of maxillofacial surgery for the new VR technique.

The initial focus is on complex Le Fort I surgery, which addresses the correction of facial deformities.

The PhD research conducted by Yesh will be completed during 2017, but the project’s scope has been broadened by the involvement of the University of Huddersfield’s Dr David Peebles, an expert in cognitive processes.

He is supervising the doctoral research of Matthew Pears, who has bachelors and masters degrees in psychology and cognitive science.

Matthew realised that Yesh’s project would be a good springboard for his own PhD and he is investigating ways in which human factors and non-technical skills, including the situational awareness that is vital but instinctive for experienced practitioners, could be incorporated into the VR surgery.

Matthew’s research has included conducting cognitive task interviews with maxillofacial surgeons who have spoken in depth about their experiences and how they react when problems arise during surgery.

‘A lot of training of surgeons is about the nuts and bolts of doing the surgery,’ said Dr Peebles.

‘But there is a whole aspect of their expertise that is called situation awareness, which is about developing a mental model of the whole task and the whole environment.

‘It’s much broader than just doing the surgery and really vital for training novices.

‘Now we are trying to encapsulate all the extra knowledge that experts have and Matt is exploring ways to incorporate it into the system that Yesh has designed.’

The VR surgery project, which has been validated by expert surgeons in the UK, underwent evaluation trials in India, Yesh Pulijala’s homeland.

He was joined by Professor Ma, Dr Peebles and Matthew Pears for a two-and-a-half-week trip that was partly funded by the Santander Mobility Fund.