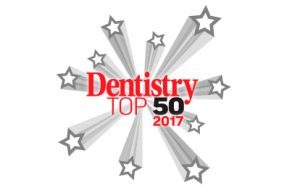 It’s time to get voting for who you think has been the most influential person in dentistry over the past year.

Submit your choices by visiting www.dentistry.co.uk/top50.

Dentistry Top 50 launched in January and it’s a great opportunity for you to have your say on who you think is the most influential person and to make sure they get the recognition they deserve from their peers.

This is the 12th year Dentistry.co.uk and Dentistry magazine has run the Dentistry Top 50.

All you have to do is pick your top five dental professionals who have had the most influence on you over the past year.

We’ll let you know the results in May on Dentistry.co.uk and in Dentistry magazine.

NHS England chief dental officers (CDO) have topped the Dentistry Top 50 polls three out of the past four years. Barry Cockcroft, CDO at the time, came top in 2013 and 2015, while Sara Hurley became the first female to reach number one in our poll after she became CDO in 2016.

Since then, Sara has continued to tour England, speaking at conferences and exhibitions and highlighting the importance of oral health to politicians. She has launched Smile4life, a scheme to help highlight some of the projects practices and dental teams are running across England to improve the oral health of their local communities. The office of CDO has also had a helping hand with the introduction of the sugar tax.

To get voting, all you have to do is visit www.dentistry.co.uk/top50 and select your top five most influential people.

Alongside the Dentistry Top 50 we will be running the Lifetime Contribution Award.

This is also the fourth time we have run the award, after Crispian Scully won in 2016.