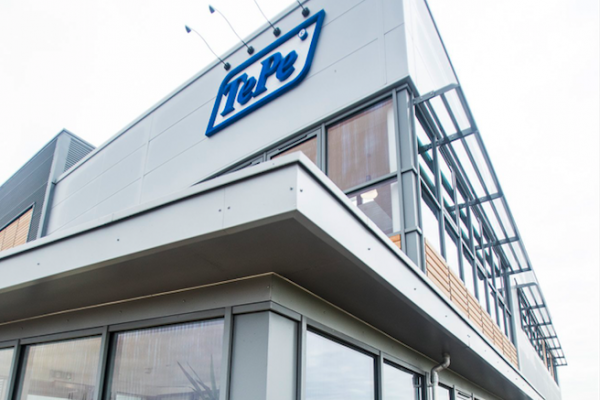 The new purpose-built building is a project, which has been three years in the making, bringing the company together under one roof. Previously office and warehouse functions had been separate as a result of growing space requirements over recent years.

Eklund House – named in tribute to the Swedish family which founded and still owns Tepe – is planned to be home for the next 20 years, with plenty of room for expansion built in and twice as much warehouse space as as before.

Speaking to over 60 guests and staff at the launch, UK general manager Jayne Lunnon said how pleased she was to have all the company’s UK staff back together under one roof, adding, ‘It’s great that our Swedish parent has chosen to invest heavily in the UK business. It was important to us to stay in the local area, it’s where we started and where we have grown. Our employees are very important to us and remaining in Somerset suits our cultural values.’

Tepe CEO Joel Eklund, the third generation of the Eklund family to run the company, performed the ceremonial ribbon cutting, commenting, ‘When we acquired Molar five years ago and set up Tepe UK we wanted to keep the business in the same area and its great to see it here under one roof. Over the last five years sales have increased by over 50% which shows the strength of the business model. This new office and warehouse is a manifestation of the success of TePe UK and demonstrates the commitment and work of the UK team.’

The building itself has been designed and built with sustainability in mind and shares many features with Tepe’s Swedish HQ in Malmo, including energy efficient solar panels and renewable timber elements. Decoration around the office has been provided by arts students from the local Bridgwater and Taunton College, who were challenged to create art works taking inspiration from the local area and Tepe’s oral hygiene products. Many of the students attended the launch to see their work in place and explain their inspiration to guests at the opening event.