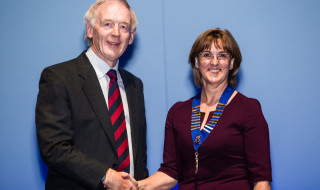 At her investiture as the new honorary patron of the British Orthodontic Society (BOS), Alison Newlyn paid tribute to her predecessor as well as to the society, which she will represent in 2017.

She takes on the role of honorary patron from David Tidy, who she says has been an exemplary ambassador for the society. Speaking at the British Orthodontic Conference, she further commented: ‘I am looking forward to following him as honorary patron in 2017, representing the society, and meeting many of you, who are the future of orthodontics and of the British Orthodontic Society.’

A clinical lead for dentistry at Surrey & Sussex Healthcare NHS Trust and a specialist in orthodontic practice in Surrey, Alison said: ‘This society has played an important part in my career, starting with my involvement with the community group, and leading on to other roles in orthodontics and the wider field of dentistry. Getting involved in this way has proved immensely rewarding to me and greatly enriched my clinical career.’

She continued: ‘I have always been interested in building links between general and specialist practice, and while chair of the community group I was elected to the BDA representative body. I have long been involved in developing cross specialty working locally and regionally, as well as postgraduate dental education.

‘For me, getting involved has meant seeing the bigger picture, working with interesting and talented people and – importantly – learning a lot. I have been able to apply that learning in so many areas of my professional life, and I strongly recommend getting involved to everyone!

‘I am very much looking forward to my year of office as honorary patron, meeting orthodontic colleagues in all areas of practice and hearing about their triumphs and tribulations! I hope to offer a perspective from the end of a varied career that even in challenging times, working together is key to facing the difficulties that lie ahead.’