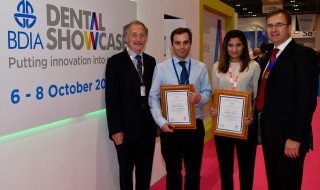 The winners were announced at the recent BDIA Dental Showcase held at London’s Excel.

This year’s winner was Kreena Patel, a London based Kings College postgraduate endodontic student, for a paper on the reimplantation of a tooth published in the Primary Dental Journal in May 2016.

Second place was awarded to Edward Sinclair, a dental core trainee in Dental Public Health, Health Education England, for a paper on Brexit published in the British Dental Journal also in May 2016

BDIA president, Mike Cann presented the awards and commented, ‘It was a delight to present this year’s awards to Kreena and Edward, who are both very capable young writers.

‘Congratulations in particular must go to Kreena for this year’s winning article.’

3d
|
Young Dentist
Dentistry Online uses cookies to give the best experience. If you continue to use our site, we will assume that you agree to the use of such cookies. Read More.
Accept