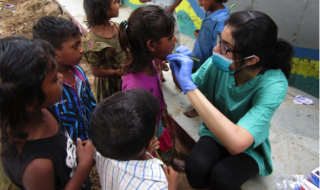 When applying for dentistry, an elective was something I always looked forward to. Having reaching fourth year of dental school, it dawned upon me that an elective was not something the University of Liverpool any longer offered to its undergraduates.

However, we’d been given our usual five week summer holiday and I was determined to make a difference and to make essential changes at an underprivileged school in India. After a lot of planning and preparation, I was lucky enough to be the first person to ever put a toothbrush in the hand of these children at the school.

To be able to do something in aid to street children has always been something close to my heart but to be able to incorporate my professional knowledge and intervention was a privilege. The ‘free school under the bridge’ in New Delhi was a voluntary school set up outdoors under a bridge by a shop keeper in aim to teach children from the slums, who had no possibility of a school education, basic literacy and further improve their education.

Unlike the United Kingdom, where education is provided for everyone regardless of social class and financial status, in India education for the poor is improbable. This involves education in many forms and one that was of interest to me was of health care, particularly oral health.

The importance of oral health

The aim of my trip was to raise awareness and emphasise importance of oral health, to establish the current oral health knowledge and habits of the children as well as to provide some intervention in the form of oral hygiene instruction and fluoride varnish application, something these children would never have otherwise been exposed to.

Whilst preparing for this trip, many factors were to be in consideration. One of significance was cross infection control. For me this meant all the correct vaccinations, malaria tablets and all the correct personal protective equipment. So as well as taking 150 toothbrushes, I packed a box of gloves, masks and tunic. It was essential to change each item between each child to prevent cross contamination as well as make the children aware that the toothbrushes shouldn’t be shared.

Although I was aware that the cross infection control in India nowhere near followed our HTM01-05 document we have in the UK, it was a surprise to me when I got there the conditions were very poor including sewage waste nearby, a lot of insects and widespread disease amongst the children.

When questioning the children, a dentist is something they had barely heard of and their daily regimes of tooth brushing was occasionally not with a toothbrush but with the mud and sand mixture of the ground upon which they sat on. It was very shocking to see that for most it was the first they had seen of a toothbrush and so teaching them the correct ‘modified bass’ technique was completely new to them.

One useful behavioral technique in which I adopted included ‘modelling’. This was demonstrating the correct brushing technique and getting the other children to watch so they could adopt it more easily. Another included ‘tell-show-do’ which proved extremely useful in teaching the technique and for this I had taken model teeth.

Although I had planned this trip alone, it was a difficult task for me to attend to every child, so I utilised my team work skills and taught and explained everything to the school owner who also had previous limited knowledge. The long term benefit of this included that this programme had now been implemented into the school and after distributing the toothbrushes, something that the children will hopefully adopt a daily habit of at the start of the school day.

Application of fluoride varnish was also of use to these children. Although, it may not be applied four times yearly as it should to reduce dmft by 33% in children, even a one off application will make some difference.

I now hope that the programme has been implemented as part of the daily routine and the importance of oral health is introduced to these children. I hope myself to come back next summer to see the progress and further contribute.

4d
|
Young Dentist
Dentistry Online uses cookies to give the best experience. If you continue to use our site, we will assume that you agree to the use of such cookies. Read More.
Accept