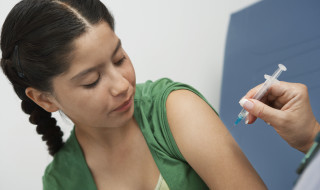 A health minister has hinted that she backs giving all boys the HPV vaccine to cut rising rates of mouth cancer, with a decision due next year.

Jane Ellison told MPs that she understood calls for the jab to be universal among adolescents and revealed she had held talks with Public Health England officials about the move.

The comments came as the minister announced that the first gay men had received the vaccination, under a pilot scheme that got underway in two clinics this week.

There is mounting evidence that many are caused by the human papilloma virus (HPV) – and that giving the vaccine to all year eight girls does not create sufficient ‘herd immunity’.

Meanwhile, the independent Joint Committee on Vaccination and Immunisation (JCVI) is investigating whether to extend the vaccine to all boys, with its verdict due early in 2017.

Answering a Commons debate, Mrs Ellison said: ‘I understand the wish for it to be available to all adolescents regardless of gender.

‘The JCVI is reconsidering its initial advice on this and modelling is under way to inform its consideration.

‘We will look at that as a priority when we get it.

‘I recognise the frustration that people have expressed and I have talked personally to Public Health England officials who are involved in the modelling work.’

The minister said money was already available to extend the vaccination programme if the JCVI said yes, adding: ‘The government has always acted on its recommendations.’

The move would delight leading dentists, including Sir Paul Beresford, the chairman of the all-party parliamentary group on dentistry, who again called for it during the debate.

‘Up to 70% of oropharyngeal cancers are caused by HPV.

‘In addition, recent research has found HPV in nearly 20% of large periapical dental abscesses – not as the cause, but probably as a co-contributor to the infection.’

Sir Paul said the annual cost of the HPV vaccine for boys and girls – about £22m – would be ‘small beer’ set against the £300m-a-year bill for treating head and neck cancers.

The MP has previously warned that dentists face the risk of being sued by angry patients, if they fail to spot mouth cancers.

During the debate, Mrs Ellison acknowledged criticism that England was not going as far as Scotland and Wales, who will vaccinate all under-45 men who have gay sex and attend sexual advice clinics.

However, she defended the trial, saying: ‘I was somewhat disappointed by some of the stakeholders’ comments, particularly talk of stalling or small pilots.

‘This is a large-scale pilot that should eventually reach up to 40,000 MSM – more than 35% of those who attend genito-urinary medicine and HIV clinics annually.

‘It will have a good geographical spread, including areas with the highest MSM populations, as well as rural areas.’

Jatinder Ubhi explains how he first came across The Wand and how it is transforming his patients’ injection experience. Do…