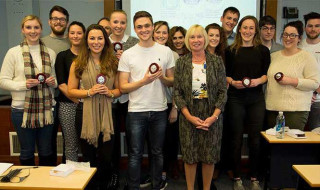 Students from the University of Dundee School of Dentistry | young dentist

Students from the University of Dundee School of Dentistry have been recognised for their work with voluntary and community organisations.

As part of their Dental Public Health programme, groups of fourth year dental students worked with the aim of helping some of the people who have complex needs.

A group who worked with The Willow Centre, a drop-in service set up by the Dundee Association for Mental Health (DAMH), were deemed the most successful and awarded a special prize.

Presenting the group with their award Janet Goodwin, president of the Oral Health Foundation, recognised the example the students were setting for other schools across the UK.

Janet said: ‘These students have shown that there is a real potential for dental care professionals (DCPs) to identify and address the barriers preventing people from maintaining good oral health.

‘All of the students have set a real example to other DCPs and dental schools through their inventive and exciting projects.

‘The winning group in particular have recognised the important factors preventing good oral health among service users, the foremost was dental anxiety, and have it addressed through a series of five workshops aimed at building their confidence and comfort with dental care over time.

‘I hope that other schools and DCPs are able to take inspiration from their good work and use our resources to continue to help vital oral health messages reach some of the most in need areas of society.’

The competition was judged by an expert panel comprised of Janet Goodwin; Professor Mark Hector, dean of Dentistry; Dr Kevin Davey, associate dean for Quality and Academic Standards; and Derek Richards, director of the Centre for Evidence-based Dentistry, DHSRU.

‘Being able to spend time at the Willow Centre talking to the service users was a rewarding and insightful opportunity,’ said Michael Young, a member of the winning group.

‘It was a privilege to visit the centre and our whole group learned so much as a result.

‘And it was great winning the project – we were up against some tough competition in our year and we were all pleasantly surprised!’

47d
|
Young Dentist
Dentistry Online uses cookies to give the best experience. If you continue to use our site, we will assume that you agree to the use of such cookies. Read More.
Accept