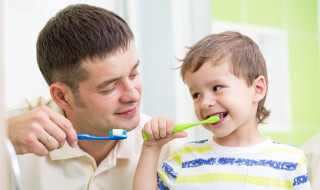 A poll carried out by the British Dental Health Foundation (BDHF) found that 37% of parents stopped supervising their children when tooth brushing before they were seven years old.

The NHS advises parents to supervise children brushing their teeth until they reach at least seven years old.

‘We are in the midst of a children’s dental health epidemic in the UK,’ Dr Nigel Carter OBE, chief executive of the British Dental Health Foundation, said.

‘Much has been made of the extent that sugar has crept into our diets and snacking habits and while this is a deeply influential factor in decay rates, we also have to look at the daily oral hygiene routine.

‘Ensuring children are properly supervised brushing their teeth twice a day with a fluoride toothpaste is one very simple and effective way of helping to address the issue.

‘Children are simply not being given the opportunity to learn and develop the basic oral health skills and routines from they need from an early age, potentially setting them up for a lifetime of poor oral health.’

Children should be brushing their teeth twice a day with a fluoride toothpaste as soon as their first teeth appear.

The BDHF also recommends that children don’t rinse their mouth with water after brushing, but spit out the toothpaste, to ensure fluoride stays in the mouth for longer.

‘Tooth decay is mainly caused by how often sugar is eaten or drunk, not the amount of sugar or acid in the diet.

‘A staggering amount of children are visiting hospital to have teeth extracted due to tooth decay, this is really appalling as it is entirely preventable.’

Meranda Gomez-Adams discusses what it was like taking home the Best Recently Qualified Hygienist accolade at the Oral Health Awards.…