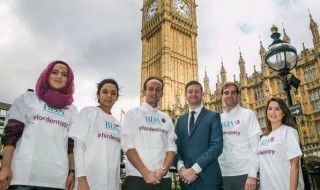 The trainees set out to explain their worries that the Government’s proposals on the junior contract might put patients and practitioners in jeopardy.

MPs including Clive Efford, Jim McMahon and Nick Brown met with dentists from their constituencies, at a lobbying event in the Houses of Parliament, facilitated by the BDA.

Front benchers also heard first-hand the trainees concerns’ about the short and long-term impact of the proposed changes to the junior doctors’ contract, if they are implemented.

The BDA has said that it believes the proposed contract is unsafe and unfair, it removes vital safeguards for dentists and patients, as the limits for rest and break-times may be eroded.

Speaking yesterday, Ursala Jogezai, vice chair of the BDA’s Young Dentist Committee and a dental core trainee in oral and maxillofacial surgery said: ‘Today we came to the Houses of Parliament to raise our concerns on the junior contract directly with our local MPs.

‘I want to thank each of them for showing their support.

‘The terms of the proposed contract are not safe and put patients and hospital juniors at risk.’