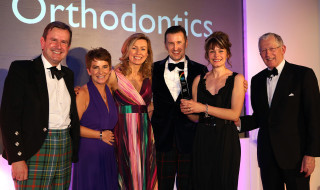 A Dundee orthodontic practice, which prides itself on transforming smiles, has been hailed the ‘Services Business of the Year’.

Hosted by BBC’s ‘The Apprentice’ and ‘Countdown’ presenter Nick Hewer, with entertainment provided by ITV’s ‘The Voice’ winner Steve McCrorie, the glittering awards ceremony was held at Fairmont Hotel, Andrews and attended by almost 600 industry leaders from throughout east central Scotland.

The Services Business of the Year category, recognises strong customer satisfaction and service excellence, commercial success, as well as a proven commitment to developing new talent and local procurement.

The contemporary and dynamic specialist practice, opened in 2007 and is owned by specialist orthodontist Ruaridh McKelvey and his wife, qualified dentist Jane Adams. It’s sole focus is to create beautiful smiles for people of all ages and prides itself on offering a truly different type of orthodontic service with a customer-centric approach at its core, delivering exemplary service and care to the highest standard.  The practice has grown rapidly, with patient numbers doubling between 2010 and 2014.

The accolade adds to Beam’s impressive awards portfolio, having won the coveted Dentistry Scotland ‘Best Specialist Practice’ award in 2011, 2012 and 2013, as well as ‘Practice of the Year – East’ in 2012.  Beam was also voted ‘Highly Commended’ in the ‘Best Dental Team’ category in both 2011 and 2012.

However, as Mr McKelvey explained, The Courier Business Award is a particularly special win – “We are proud to have won several dentistry awards over the years but this particular award saw us competing against other local businesses, in a huge range of sectors. A huge part of our success can be attributed to our team who, due to our investment in them, enable us to innovate, develop and give our patients expert, friendly service.