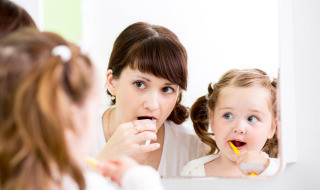 The survey also found that those children affected had an average of three decayed teeth due to the disease.

According to the survey, there was a dramatic variation of tooth decay prevalence ranging from 2% to 34% across the country.

In some cases a particular type of decay called ‘Early Childhood Caries’ was found by the survey.

This affects the upper front teeth spreading rapidly to other teeth and is related to the consumption of sugary drinks in baby bottles or sipping cups.

There is a much higher risk of tooth decay if sugary drinks are given to children.

This is the first time a survey of this age group has been carried out nationally so the findings form a baseline from which PHE can continue to collect data.

To keep children’s teeth healthy, PHE is encouraging parents and carers of young children to:

Responding to Public Health England’s figures Dr Christopher Allen, chair of the BDA’s Dental Public Health Committee, said: ‘As tooth decay is largely preventable, parents, nurseries, retailers, governments and dental professionals must all play their part to reduce, if not eliminate, this disease.

‘Parents and carers may feel that giving sugar-sweetened drinks is comforting, but in reality it’s more likely to cause pain and suffering as it is the major cause of tooth decay in toddlers.

‘Worse still, thousands of these youngsters end up having to be admitted to hospital to have rotten teeth extracted under general anaesthetic.

‘Prevention and education are the key to tackling this disease with parents leading by example.

‘It’s never too soon to take your toddler to the dentist – ideally no later than 18 months – because dentists can identify and treat tooth decay at the earliest stage and advise parents on tooth brushing and prevention.

‘But the Government also has a major responsibility to invest in prevention.

‘From sugar controls at check-outs to targeted oral health interventions, we must find ways of ensuring good oral health from an early age.

‘This survey testifies to the effectiveness of water fluoridation as an important and safe measure in reducing the gap between children with the best and worst dental health.

‘Until we see the political will to end this scandal, governments will keep footing the bill for preventable treatment and very young children will continue to suffer unnecessary pain and undergo traumatic hospital procedures.’