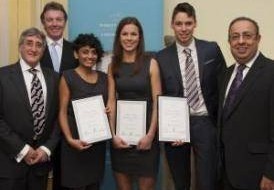 Launched in 2012, the award is now in its third year and open for entries.

Rahul Bose was the winner in the first year and his entry is on the HSCE website as an example of an excellent case presentation.

Jamie Nelson, winner in 2013, is on the website of the Saving Teeth Awareness Campaign http://www.savingteeth.co.uk/against-all-odds.htm.

Jamie’s winning account of saving the tooth of his patient is a perfect example of a tooth saved against the odds.

Chloe had been told by her previous dentist that her lower molar would have to be extracted.

She decided to get a second opinion from Jamie who told her that he would do his best to save the tooth, which he did.

Julian said: ‘It is admirable to see young dentists acting in the best interests of patients by providing root canal therapy and saving teeth.

‘Our winners in the first and second years have given this award great momentum as have the sponsors, Dentsply, QED and Sybronendo.’

As in previous years, the prizes for first, second and third place winners will be valuable equipment useful to dentists aspiring to undertake endodontics at a higher level as well as the opportunity to observe at 121 Harley Street.

The judges of the award are Julian Webber, Trevor Lamb and Professor Andrew Eder.