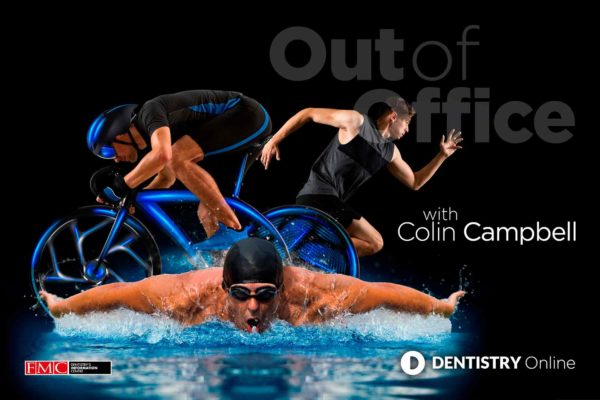 Colin Campbell | Out of Office | Triathlons This week, Colin Campbell talks about his triathlon experiences and why he recommends taking part.

I first competed in a triathlon in 2008 after aspiring to be a triathlete since 2003.

At school I was fit, really fit, I played basketball sometimes 30 hours per week. By the time I finished university I had put on five stone and peaked at 18 stone!

The next 15 years was a battle with weight, I would run on and off and I could swim a little bit, but I hadn’t really picked up a bike since I was a boy. In 2003 I decided I wanted to try some cycling. With a little bit of money that I was given when a relative passed away, I bought my first road bike, shoes, helmet, cycling top and shorts for £500 all in.

I went on holiday that year and started swimming in the swimming pool after I had run on the beach. I started to get the idea that I’d like to compete in triathlons.

Locally in Nottingham there is an extraordinary company called One Step Beyond, which runs one of the best triathlons in the UK now. At that stage they were running a short sprint triathlon twice a year near Nottingham, 400m swim, 12-mile bike, three-mile run. I competed in that in 2008 without a clue as to what I was doing. But that day I met someone who was an ‘Iron Man’ and decided that I wanted to be that.

Over the space of the next seven years I developed plans, got coached, learnt as much as I could and completed the Outlaw triathlon (Iron distance) in 11 hours and 9 minutes in July 2015.

That was not only the highlight of my triathlon ‘career’, it was also my retirement. But I didn’t know it at the time.

Soon after that race I started to get pain in my left leg when running. I had to stop running on and off over the following 12 months. In July 2016, I was diagnosed with a defunctioned lateral meniscus by an orthopaedic surgeon and all running stopped forever!

So, my triathlon ‘career’ was gone just as it was really getting going.

I never loved the swimming, but I loved the running and I continue to love the bike and have been able to take that on further after my triathlon ‘career’ stopped.

My most memorable experience was the last three miles of the Outlaw triathlon in 2015. I had managed to leave a bit in the tank to run around the lake in Nottingham with masses of supporters and sprint through the finish, moments I will never forget.

I was asked by Seb to put down these thoughts and asked would I recommend it to someone else.

In general, triathlon is a wonderful community and a wonderful sport, which is very inclusive to people of all abilities. It’s expensive though to get some of the kit to compete so therefore can be a little bit exclusive. But you don’t have to spend the world and you don’t have to race crazy long races.

I’ve been to some wonderful places on my bike and ridden with some wonderful people. I hope it keeps me fit – it certainly helps me control the stress of difficult times in dentistry and might make me live a little bit longer!

Andy Legg will reveal all on implant dentistry at FMC’s North of England Dentistry Show. Taking place on Saturday 12…

8hr
|
Implant Dentistry
Dentistry Online uses cookies to give the best experience. If you continue to use our site, we will assume that you agree to the use of such cookies. Read More.
Accept