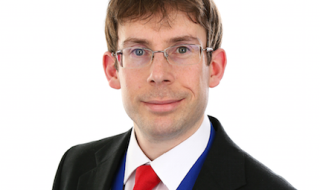 James Green has been inaugurated as the ninth president of the Dental Technologists Association (DTA), the professional representative body for dental technologists in the UK.

James is currently a maxillofacial and dental laboratory manager for London’s Great Ormond Street Hospital for Children and the North Thames Cleft Centre, a supra-regional network for patients with clefts of the lip and palate from North London, Essex and South and West Hertfordshire. This service is run jointly by Great Ormond Street and the St Andrew’s Centre for Plastic Surgery at Broomfield Hospital near Chelmsford so he also works there for part of the time.

James trained at Barts and the London, Queen Mary’s School of Medicine and Dentistry in association with Lambeth College and qualified in 2001. After a vocational training year at the Royal London Hospital he spent the following two years at the Eastman Dental Hospital, part of the University College London Hospitals NHS Trust, before transferring to Great Ormond Street in 2004.

James is an accomplished author and lecturer. He has written or co-written papers for publications such as The Angle Orthodontist, the British Dental Journal and The Cleft Palate-Craniofacial Journal. He is an invited speaker both nationally and internationally. As well as lecturing widely throughout the UK, his work has been presented at conferences held in Germany, Sweden, Poland, Brazil and the USA. He also served as a lecturer in orthodontics at Lambeth College.

He has been the recipient of several awards including the Quintessence Book Prize for the best student from a London teaching hospital, the British Orthodontic Society Technicians Award and the Fellowship of the Orthodontic Technicians Association.

The Dental Technologists Association (DTA) is the professional representative body for dental technologists in the UK. The association is managed by an elected council and chief executive Sue Adams who is based at the DTA head office in Gloucester. www.dta-uk.org

Septodont introduces its range of Septoject needles and explains how it avoids any manufacturing defects. Using needles is a part…

6d
|
Laboratory
Dentistry Online uses cookies to give the best experience. If you continue to use our site, we will assume that you agree to the use of such cookies. Read More.
Accept