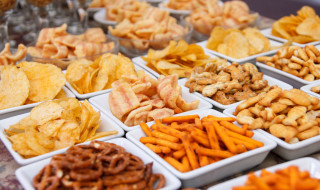 The British population’s snacking habit is waning, according to new research from Mintel.

A survey by Mintel highlights that chocolate, which in 2014 was Britain’s most eaten snack tied with fresh fruit, has fallen as a snack choice by 9% over the course of a year.

In the same time frame, the number of Brits snacking on crisps and crisp-style snacks fell from 67% to 57%, the proportion snacking on sweets dropped from 40% to 29%, those snacking on cakes and sweet baked goods declined from 51% to 39% and an 11% drop in usage was seen in the pie, pastry and sausage roll segment, with just 25% of consumers snacking on these products in the month to December 2015.

However, it’s not just ‘unhealthy’ treats that are seeing a drop in consumption.

Whilst it’s still Britain’s favourite snack, the number of consumers eating fresh fruit outside of mealtimes dropped from 68% in December 2014 to 61% in the month to December 2015, and the proportion snacking on fresh vegetables dropped from 32% to 21%.

‘Health remains an ongoing issue for consumers, with calorie and sugar content of high relevance and as swathes of the population try to address this, it appears to have had a knock-on effect on consumer snacking’, commented Amy Price, senior food and drink analyst at Mintel.

‘Currently new product development is failing to cater to the demand for healthier products, suggesting scope for innovation in healthier variants to be used to appeal to health-conscious consumers.’

The research suggested, however, it’s hunger rather than greed that leads to snacking.

Over half (53%) of those surveyed who eat snacks say they snack to satisfy hunger between meals, while two in five (42%) say they do so to satisfy a craving.

Additionally, comfort eating is still a habit for 23% of snackers, who say they snack to cheer themselves up and approaching one in five (18%) do so to de-stress or to relax.