Patients would rather hold a tarantula than visit the dentist 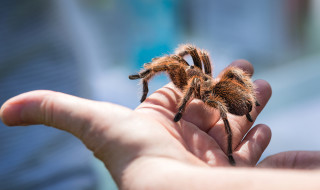 Patients would rather hold a tarantula than visit the dentist

More than one in 10 UK adults (12%) would rather hold a tarantula than sit in a dentist chair, according to new research.

The survey, undertaken by Oasis Dental Care and conducted by Yougov as part of the National Health Report 2015, also found that 33% of those who have ever visited a dentist felt scared before a dental appointment.

Additionally, the possibility of having a dental procedure was found to be the top reason why people suffer from a phobia of dental care, with 31% of those surveyed admitting this is what they were afraid of when visiting.

‘A lot of people’s fears can come from a lack of trust, relinquishing control and the unknown’, said Eddie Coyle, head of clinical operations and a practising dentist at Oasis Dental Care.

‘Visiting the dentist regularly helps to build up a rapport with your local clinic team, which is a big part of putting people at ease.’

Needles and injections were the second most off-putting reason (30%) for visiting the dentist.

Bad childhood memories of the dentist chair or not liking having medical treatments in their mouth was the joint third most popular reason, with just over one in five (22%) of those surveyed admitting past experience has scared them about visiting the dentist.

Thirty-eight per cent of 25-34-year-olds surveyed admitted to being scared potentially having a procedure performed – making it the most fearful age group when it comes to having work done.

Worryingly, 25% of UK adults have taken toothache treatment into their own hands.

The age group most likely to treat their toothache themselves is 45-54 year olds, with 30% of respondents admitting to doing it themselves.

The north east was one of the braver regions when it comes to visiting the dentist, with 43% having no fear at all.

Yorkshire and the Humber was named the region most fearful of the dentist, with 15% of those surveyed feeling very scared before an appointment.

Furthermore, 30% of surveyed UK adults said they would rather clean a toilet and 14% admitted doing their tax returns would be more desirable than a visit to the dentist.

More than 70 different dentists who held NHS contracts have ceased doing NHS work over the last year. This is…